44F - The Last Station (2): Dorian Frog shifts into action with the unexpected arrival of the Hell Train. On board the train, Baam informs the rest of Hwa Ryun's plans for when they arrived at the Last Station.

Soyong desperately tells Ryu-Ahn not to shut the dock, with the latter getting confused on what action he should take. Meanwhile, Dorian Frog lands in front of the train and then immobilises it with a sticky mucus. The dock has still not been closed, confusing Ha Cheonhee, but Levy arrives at the control station and subdues Ryu-Ahn before closing the dock himself. With Poro Poe alarmed by the immobilised train and the closing dock doors, Hwa Ryun instructs him to open the train doors, enabling White to exit. Completely surprising Dorian with his presence, two Rankers go to take him down but White effortlessly kills them while simultaneously getting rid of the sticky mucus immobilising the train. With Dorian wondering who the hell he was, White introduces himself as 10th Slayer of FUG. With the opportunity reopened, the train hurtles towards the station! 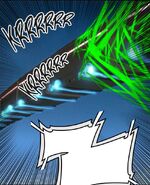 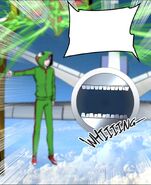 The king of show-off White. Let's give him a pass for now since he looked pretty bad-ass. 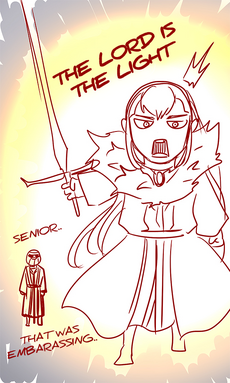 Recently, the word "light" seems to be on trend in SNS.. (Like Light Hyun-Woo.. or Light Ui-Jo)


“White” is a pretty bright(;;) enough word itself,
But White in Tower of God doesn’t seem to have a bright personality. Rather.. seems to have a personality disorder.
Anyway, after his meeting with Gustang, the White coin is on the rise again..
Of course, he’s known to be this area’s legendary Slayer only based on hearsay, so what will actually happen, I would not know ha ha

This episode.. feels like a bumpy introduction in many ways
Personally, I’m feeling a bit down these days,
But I try my best to elevate the tempo of the work ha ha..
Which isn’t really an easy task, so I hope one day we can be both on the rise in various ways.

It seems like Hwa Ryun is temporarily in charge of Khun’s role in Baam’s team this time
If Khun is an elite who is good with petty tricks, Hwa Ryun is more like the one who pulls strings from behind and possesses dark secrets ha ha.
Well.. as some of you may already know
Aside from whether they are Rankers or High Rankers, the presence of a Guide has a huge impact on a battlefield
That’s how special the Princesses with the 13 Months getting paired up with Guides means
Just because Evan was shown to be scolded by Yuri on many occasions, he is not someone to be walked over.

Anyway, although White still has a long way to go to be considered as the “completed state”..
He looks pretty strong coming out from the train.
As shockingly as it is, current White with the spell being cast off is ranked as a Regular(..)
Looks like there is a chance that he will wreck the ecosystem just as much as an Irregular.

Have a happy,
Healthy,
And fruitful week

Retrieved from "https://towerofgod.fandom.com/wiki/Vol.2_Ch.317:_44F_-_The_Last_Station_(2)?oldid=127038"
Community content is available under CC-BY-SA unless otherwise noted.