??F - Hell Train: Three Orders (6): Evankhell and Red Brubya argues over which of them should show respect to the other one, but they are interrupted by Tinker Yolche, a faithful servant of Kallavan. Due to Tinker Yolche preparing a attack after hearing a warnings from Evankhell, Evankhell decides to attacks her, but Tinker Yolche defends against it. Evankhell's next attack is blocked by a unnamed person, who look like a male version of Tinker Yolche. However, it is revealed that is was Yolker, a high ranker, that blocked the attack from the backline. After a provocation from Yolker, Evankhell activated her power of the Ancients, but she is interrupted by the 2nd Floor Administrator. The Administrator fires Evankhell and Yu Han Sung from their positions and teleports them to a warp gate.

Androssi Zahard and Beta are still fighting White, but when White is out of sight, Hwa Ryun approaches him and offers to help him find his last clone in exchange for help in the upcoming battle at the Last Station.

Rachel reveals to Twenty-Fifth Baam that she knows about his past, so that Baam will continue to have a reason to chase after her. Afterwards, Ha Yura escapes with Rachel down a hole, leaving Baam with many questions. 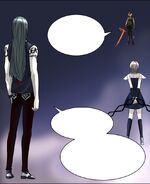 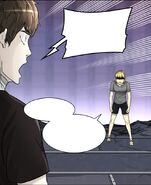 Seeing the regulars again after a long time. But the atmosphere feels eerie. 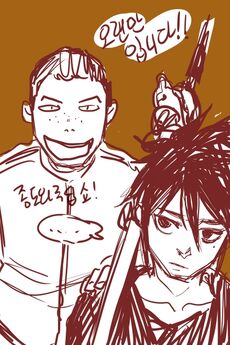 Hi ^^
This is the Tower of God Season 2 Chapter 314 postscript.
It’s still hot,
but seems like the heat wave has lessened a bit. I wonder how you guys are all doing
Health should always be the top priority, so please take care of it well.
Webtoon is good for your health in this kind of weather, because you can read it indoors ha ha.


As for this chapter..
Feels like a section has passed and now a new section is coming. ^^;
Like a new enemy and stuff.. Many things were revealed.
About Kalavan.. His underlings seem impressive.
I wonder what kind of guy he will be..
Wonder if he will impose a great danger to Baam and co..
Wonder if he will be a tough character to draw(...) I’m already starting to get worried.
Anyway, since he’s a commander of an army corps.. I get the feeling that the scale will expand.(author’s.. tear)

After Rak’s secret was revealed, the fact that Evankhell is an ancient species was also revealed
As Evankhell was fired even before showing her true power… Her power was barely revealed in this chapter.
Considering her ranking, she truly is strong..
But, a bum will be a bum.

People say that,
thanks to Evankhell handing the Floor of Test over to Yu Hansung,
the Floor of Test could be under proper operation,
And as you can guess from that,
when Evankhell was staying at the Floor of Test the tests were said to be pretty hellish.
It’s something I would like to draw in later times, but for now I will hold onto it
We have to climb the tower first.

About the familiar faces at the end,
I wonder if they can meet Baam without any trouble, or are currently stepping into a wild chaos
Well, it’s good to see them after a long time anyway ha ha drawing these kinds of guys is a joy to me


Recently my shoulders and neck suddenly got worse
So I was trying to take care of them by changing the pillow and stuff,
but still they aren’t really getting any better.
I’m happy that I like the new pillow though. I’m considering to change the bed as well ha ha

Hopefully you all enjoyed reading this week’s chapter,
For me, it’s too bad Yu Hansung didn’t die…
I shall return together with the Tower of God’s new chapter
Have a healthy, and happy week!
Thank you ^^

Retrieved from "https://towerofgod.fandom.com/wiki/Vol.2_Ch.314:_%3F%3FF_-_Hell_Train:_Three_Orders_(6)?oldid=151402"
Community content is available under CC-BY-SA unless otherwise noted.