??F - Hell Train: Three Orders (5): Twenty-Fifth Baam start to advance towards Rachel, having activated the first Thorn Fragment and is ready for a fight. In response Rachel tries to stop Baam by using her three Lighthouses, but Baam easily blows them away, something that prompts the Treasure Eating Stingray to attack Baam. Baam senses the attack, he dodges it and uses Blue Oar to defend against it. Baam is not able to see the Stingray, but he only knows that Rachel has something up her sleeve. Baam then steps up the attack to counter the unknown power of Rachel and uses Shinwonryu orb to attack the location of Rachel's power. Before the attack lands, the Stingray retreats, which leaves Rachel defenseless.

Androssi Zahard is fighting White, and with the support of Hwa Ryun and Beta they are giving White a hard fight. Rachel, defenseless in front of Baam, cowers in fear when Baam unleashes his power in emotional outbursts. After venting a bit, Baam tells Rachel that he really cannot understand her anymore and that he could not care about what she does with herself from now on. However, if she hurts his friends again, he might have to kill her. Ha Yura worries about Rachel, who now is on her hands and knees, completely defeated in front of Baam. Rachel reveals that she has always felt that Baam would outshine her, even though Baam knows nothing about himself, which ends with her hinting that she knows about his origin.

Yu Han Sung fully accepts the death penalty he has received from Zahard, with his only regret being that he wanted to taste more types of coffee before he died. Red Brubya's attack against Yu Han Sung is interrupted by Evankhell, who is quite angry that Zahard's forces has invaded her floor and attacked her servants.

As expected, looks like wearing a red hat boosts a person's strength 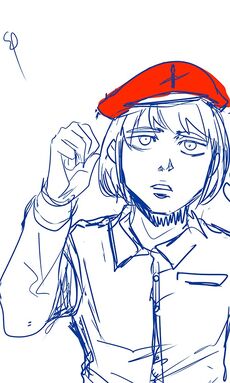 The drawing for this week’s postscript comes together with a red
that may boost your strength exactly by triple..
To be honest, red is not a color I want to see,
considering the hot weather in these days ha ha
Anyway..

As for Yu hansung’s side,
Seems like his lifeline is tougher than it looks ha ha
Although the name of the Floor of Test’s ruler has been mentioned quite frequently ever since the Best Challenge,
the setting has changed a lot from the past.
Sometimes people are mistaken about it,
but all of the settings that I have previously written before are pretty much undetermined
until they actually do appear on the story.
I have made announcements regarding this several times,
but seems like a quite number of people are still unaware of this TT
The same problem kept repeated so now I have turned them all to private, but..
Anyway, they are very different.(and wrong)
Evankhell used to be a man back in the Best Challenge, and even now, well..
it’s kinda hard to say that she’s perfectly female..
that’s the case ha ha
For more details, the plot needs to be progressed further..

Rather than to say that the relationship between Baam and Rachel has changed,
I think what eventually had to turn out like this was being postponed for a long time.
Rachel always acted thinking “Baam will ultimately end up like this-“
And as for Baam, although that wasn’t exactly the case for him,
it’s still true that this is what he has reached to.
I think people who have become too accustomed to being hated in their lives,
come to feel more comfortable when they are being hated, rather than being loved.
Whatever it is, seems like the two will move forward in a certain direction.

I heard that there is a fan-cafe meeting on Saturday, so I went there
Feels like the time when I went there thinking
‘Wow, really? From my Manhwa fan-cafe?’ was only yesterday
But knowing that this is the sixth already,
made me realize the time truly flies by ha ha I still can’t believe it.
It’s probably thanks to the fan-cafe members and those of who love the work,
rather than to me, but, ha ha
I deeply appreciate those who joined.

When I really get to feel readers like this, umm.. well.
I feel really good.
Like, when readers do a cosplay of a character, draw fanart,
or gather at some place to share their likes,
and chat about them – and when I suddenly come to realize that I’m the one who made this.
That feeling, is truly special but also lies heavily on my shoulder.
As the work has gotten quite aged now,
I do feel the saying that “nothing will last for eternity”
But maybe because that’s how it is,
it might be good for me to get touched by each moment like this as I live.
When will moment like this ever come again?
I have to continue working persistently so that I can feel this moment even by a day longer
Of course, sometimes I should take some rest in between ha ha

So please take care of your health during the hot weather
Have a happy, and peaceful week.
Thank you ^^
[1]

Retrieved from "https://towerofgod.fandom.com/wiki/Vol.2_Ch.313:_%3F%3FF_-_Hell_Train:_Three_Orders_(5)?oldid=127034"
Community content is available under CC-BY-SA unless otherwise noted.