??F - Hell Train: Three Orders (4): Twenty-Fifth Baam steps between Rak Wraithraiser and Rachel, which prompt Ha Yura to attack Baam, telling him to stop following Rachel. However, Baam easily defends and push Yura back, telling her that this does not concern her. Baam expresses frustration at his failure to protect his friends and proceeds to challenge Rachel to a fight, a fight that will end everything between them.

Khun Maschenny Zahard form the lightning spear and attacks Ha Jinsung with the technique Tres Cuernos, which goes wide and hits her own troops. Jinsung takes the opportunity to get close and attack Maschenny in close quarters using Shinsu Piercer. While in close quarters Jinsung questions Maschenny's motives, since it does not seem like she has been fighting seriously, which she confirms is her motives. Maschenny uses a wide range shinsoo attack that obfuscates the surroundings, so she can talk undisturbed to Jinsung. She warns Jinsung about the three orders given by Zahard and puts emphasis on the order to eliminate all the regulars on the Hell Express, which would mean that Baam is in danger.

Rachel is surprised that Baam is angry at her, she feels that killing Khun Aguero Agnis is withing the perview of what is acceptable to be done within fair competition between regulars. However, Baam sees it as her hurting, or potentially killing his friend, something that he will punish her for. This conflict from a difference in perspective leads Rachel to get emotional and the Treasure Eating Stingray attacks Baam for her. This attacks ends up being quite inefficient against Baam.

Maschenny and Jinsung continue to discuss the current predicament, but on the Second Floor the forces of Zahard has begun mobilizing against Yu Han Sung. The Zahard family messenger Red Brubya reveal that Yu Han Sung has been sentenced to death by Zahard for the crimes of falsely reporting Baam's death and hiding his presence. 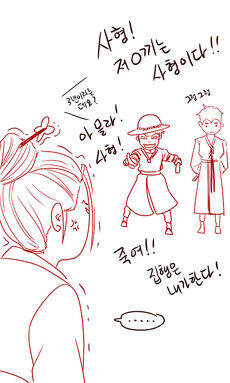 Anyway, this episode was about Baam who is better at showing anger than expected..
and the man in danger, Hansung..
Personally, I think Baam is a character who went through a lot of changes compared to the past
Depending on how you look at it,
he might as well be one of the characters who goes through the most development? I think.
Previously he felt like he was defendant on Rachel, but now that is no longer the case
And it seems like he is finding a reason to fight, and a reason to climb the Tower.

In contrast to him, Rachel is more of a stagnant character.
Rather than trying to improve her strength,
she was disheartened by her circumstances and tried to exploit her surroundings..
Also, somehow, she is currently more possessed by the obsession to climb the tower
than by the reason why she climbs the tower..
I think those kind of things are widening the gap between Baam and her.
However, I do not think these are just Rachel’s problems,
I think if an ordinary person were to be placed in an extreme competition,
anyone can surely act like Rachel.
Regardless of how the story progresses, the opposition,
or the contrast between Baam and Rachel would be the core of Tower of God’s main story.
In my case, in a situation where the competition was fierce,
I was the one who intentionally did not try my best,
to comfort myself into thinking “I was just hiding my power.”
That’s right. I am actually hiding 50% of my power when doing manuscript..
...which would’ve been nice.
I live a hard life doing as best as I can each day (bow bow)

As for Hansung, well..
Goodbye, Hansung.
You were a difficult character to draw.
I promise you won’t go far.
Fu fu.

Everyone, have a healthy and happy week
I wish you to have a week that lets your heart remain chill despite the hot weather
Hansung’s fate will be determined in next week.. Ha ha
Thank you!
[1]

Retrieved from "https://towerofgod.fandom.com/wiki/Vol.2_Ch.312:_%3F%3FF_-_Hell_Train:_Three_Orders_(4)?oldid=118736"
Community content is available under CC-BY-SA unless otherwise noted.