??F - Hell Train: Three Orders (3): When Twenty-Fifth Baam is going towards Rachel, Hwa Ryun stops him and offers her help in getting to Rachel, since she for some reason has gotten her guide abilities back on the Hell Express. Androssi Zahard also offers to help Baam in his fight against Rachel's group.

Ha Jinsung was able to defend against El Robina using a barrier in addition to his naturally tough body. In response, Jinsung does a kick attack against El Robina, which destroys the weapon. Afterwards, both Khun Maschenny Zahard and Jinsung prepare for a fight against each other.

Yeo Miseng spies on Ha Yura and Rachel using her observer and she overhears Rachel frustrations with being back to her usual weak and ugly self. Rak Wraithraiser steps up to confront Rachel, turning into his large uncompressed form and charges to attack her. Miseng is confused about Rak's anger towards Rachel, but sees it as an opportunity to get revenge against White for Prince and Hon Akraptor. However, White noticed her and sneaks behind her, preparing to devour her soul. White is stopped by Androssi and Hwa Ryun, who steps up to protect Miseng. Before Rak manages to attack Rachel, Baam stops him. 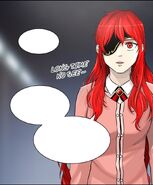 It’s been eight years since I started Tower of God. Thank you ^^. 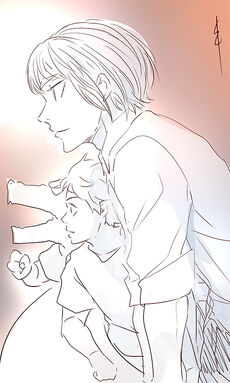 For today’s postscript drawing..
Since the break has begun and today is also a good day, I went for Rkhunbaam.
Khun is only sleeping these day..
It was difficult to draw him after a while(?)
I felt some pressure whether should I spend more effort on the postscript drawing or not (..)
as it is the eighth anniversary after all
But instead, the fan-cafe requested me an illustration for the event they are doing,
so I think that should do(...)
Later, I’ll upload at least a part of it ^^;;

About this episode, how should I put it..
It will act as a bridge to the next episode,
so I recommend you to pay attention to how the relationships are being settled and changed.
It is true that the Hidden Floor had lots of important characters..
and raised the bar for the audience in many ways
So I’m thinking we should dive into existing characters’
relationships before moving onto the next episode.
For Rachel and Baam’s case, as well as White’s case
As the train episode is getting closer to its finale,
I think there will be an ending and a new beginning.

There are many talks going on about Rachel
Many people sometimes ask me whether I like/hate a certain character,
but the answer is “I like all of them” ha ha
But, just because I like them,
I have no intention of making them siding with good or portraying them positively.
I don’t have a stereotype towards good and evil..
So I think this way is fine.
I’m into neither idealizing the good as heroes,
nor defending villain’s actions or giving them excuses..
I believe that if I progress the plot thinking
“with this kind of past and this kind of personality,
this character will probably do this kind of thing-”
The readers will make judgements themselves.

Meanwhile Maschenny and Ha Jinsung are fighting fiercely.
It would have been better if I could draw them
when I was in a better state(ofc that’s how it always is ha ha)
Even though they are fighting halfheartedly, the scale is still huge ha ha.
Looks like Maschenny has another objective in her mind.

Recently the weather is so so hot,
and it makes me worry about if my readers are taking good care of their health
Don’t stay outside for too long,
and drink lots of water and be careful of what you’re eating so that you don’t get enteritis
I hope you to be always healthy, happy, and enjoy your life.
So I’ll come back next week with angry Baam’s landing scene(..)
Have a good week!!
Thank you ^^


ps. Thank you so much for everyone who celebrated the eighth anniversary last week
[1]

Navboxes of this wiki does not appear on Mobile

Retrieved from "https://towerofgod.fandom.com/wiki/Vol.2_Ch.311:_%3F%3FF_-_Hell_Train:_Three_Orders_(3)?oldid=118735"
Community content is available under CC-BY-SA unless otherwise noted.