21F - Flower of Zygaena (2): This is the thirtieth chapter of Volume 2 of Tower of God. It follows Team Tangsooyook as they try to collect the 'Flower of Zygaena', but a mysterious man stands in their way.

Yihwa is exhausted after climbing on top of the Zygaena after it flipped over on top of Viole and co. After taking a short break, she notices that she's completely alone. Worried that they may have all died, she yells out their names, but no one responds. Despairing, she screams out how Viole is a mockery of FUG for dying by drowning, though he suddenly appears behind her and reveals that everyone survived by riding on Horyang's back.

Wangnan's team is still in Zygaena's body, searching for the flower. As they reach the end of a tunnel, they are amazed to find a huge chamber filled with floating coloured rings. As they ponder what to do, a pink piglet appears and runs across, using the rings as platforms. Wangnan notices the flower on its back and calls for everyone to catch it. Goseng uses her Lighthouses to restrict its movements as Akraptor inches up to it, but the beast manages to break free and escape.

Meanwhile, Prince and Horyang are in another section of Zygaena's body. As they explore, the two encounter an armoured animal blocking their path. Prince utilizes his three Lighthouses to stop its movements while Horyang crushes its armour with a powerful punch. It is defeated, but Horyang wonders why it seemed to be running away from something. His question is soon answered as the mysterious man from before suddenly comes crashing down. Feeling danger, Horyang tells Prince to run away.

Zygaena's body shakes violently while Viole and Yihwa are walking down the tunnels. As Yihwa complains about the disturbance, Viole suddenly becomes alert...

Yihwa yells at Viole for dying. 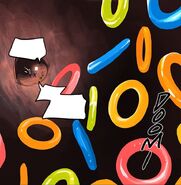 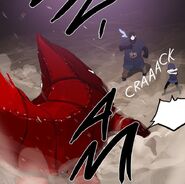 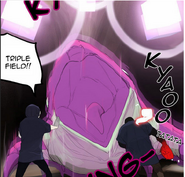 Prince and Horyang working together.

If you want to see that guy’s face,
you’re gonna have a tough time, haha.

In this chapter, we briefly saw some techniques that utilize Lighthouses;
Actually, those were originally planned to appear in the first battle scene with Viole.
They were left out for story flow, but as I told you in the beginning of Part II,
the characters in Part II are all Regulars who’ve climbed up to the 20th Floor or higher,
so their skills aren’t that useless.
If you look at their average skill levels, the Part II characters are obviously better ^^.

As the story develops, battles that utilize positions,
such as combinations like Light Bearer-Spear Bearer and Scout-Fisherman will come out one by one,
so I think for those of you who are anticipating battle scenes,
it’d be more fun if you read while focusing on these parts ^^.

I think that many of you will correctly guess the identity of the Pink Pig that appeared in this episode.

P.S.
Many readers seem to think that I have no greed for money, possibly due to the thing with the Audio Drama last time,
but I actually have a huge greed for money, and I have a lot of thoughts about making money with Tower of God.
However, I’m only going to make money when the method and the deal are right.
I’m extremely selfish and dogmatic when it comes to copyright.
I also believe this is an obvious attitude for any artist.

(The work for the book is only getting delayed,
and I’ve already made the contract. ^^)

P.S. 2
Also, I’m hoping that no more bad talk about the Audio Drama will come out.
Although I did end up posting an article like that because it turned out this way,
I have no plans to disturb those people’s futures, and I instead want to encourage them.
Of course there was a mistake in terms of how it was done, but it’s alright as long as they don’t do it again.
Of course, I would be thankful if the rest of you Voice Story people be careful and give some thought into this as well.
Then, I also hope that you’ll all encourage and listen to VS’ next Audio Drama.
I will no longer post on this matter,
and I hope no more talk about this will show up on the café or anywhere else.
Thank You.