??F - Hell Train: Three Orders (1): This is the three hundred and ninth chapter of Volume 2 of Tower of God.

Stuah Arthur receive Zahard's orders from Vice Altar Director and they contemplate what to do, since declaring that the Po Bidau Family must be killed would start a civil war. They decide to keep the order to eliminate the Po Bidau family a secret, while using the new recruit, Charlie, as a scapegoat in case they are scrutinized about the order.

Karaka sensing an opening tries to attacks Twenty-Fifth Baam with his tentacles, something Ha Yuri Zahard manage to stop him, but she is unaware of the tentacles going for Ja Wangnan. Karaka manage to grab Wangnan and hold him hostage, which he does in order for Yuri to give over Baam, however Wangnan activates his new weapon causing both Karaka and Wangnan to be transported to another part of the Hell Express.

Rachel's group wonder how they ended up in a completely different section on the train from where they entered the Hidden Floor. Meanwhile, Rachel gets really upset and angry that she was not able to keep her avatar from the Hidden Floor, and has returned to her normal self.

Yuri checks Baam's condition, confirming that he is still breathing and after finishing her check-up of Baam, Yuri starts looking for Baam's companions. She finds his companions looking over Khun Aguero Agnis's body, who is not breathing and seems to be dead. Meanwhile, on another part of the train David Hockney, Boro, and Sachi Faker discuss whether there was a point to visiting the Hidden Floor, which Hockney believe there was.

Zahard's order has been kept from spreading by using Charlie as a scapegoat, claiming he discarded the order without realizing it was an order from Zahard. This was also used as an excuse to kill all priest below the High priest, so they could not spread the news of the order, which was later classified. However, certain key individuals were told about this order, among them was Adori Zahard. Adori is not a person who settles for half measures and want to complete all three requests from Zahard, something she seems to be capable off.

A fleet from Zahard Family led by Khun Maschenny Zahard is travelling towards Ha Jinsung's residence. Jinsung ask Maschenny if she is declaring a war or something, she replies "Yes, there will be a war soon".

Despite the appearance, Ha Jinsung has quite a lot of wealth.[1] 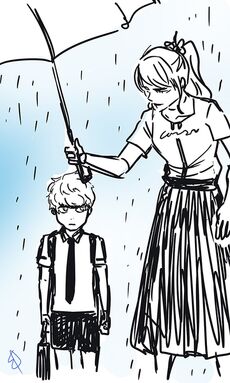 Hi.
It's been a while for Maschenny to show up,
so I drew Ran with Maschenny keeping him out of the rain..
(A concept shooting?)
But, in reality, Maschenny is far from being a kind sister like this.


This chapter..
The story after the Hidden Floor from the last chapter continued.
Because there is a restriction against talking about the Hidden Floor
I get tedious when working on the characters' lines and feelings.
It looks like the story will be separated into two for a while
A big storyline regarding what's happening in the Tower,
and a small storyline regarding the regulars.^^

I said this before, but,
Personally, I'm afraid that as the world expands and the number of points of view increase,
the readers might feel difficulty in approaching this story..
The weekly webtoon's schedule is a quite burden itself
(Unlike comic magazines, webtoon has no break.
Even if it's only a few weeks, it actually makes up a big difference)
I will try my best to prevent it from happening,
but since the work has progressed to this much
Maybe this is the time for me to try a new change or challenge. ha ha

Still, the main theme of this story is about "regualrs having adventures" in an enormous place called Tower.
Contrary to other comics,
the main characters may not be troubleshooters or take a major role in turning the situation
I wanted to show them keep climbing the Tower despite being swept by big waves and experiencing frustrations
Of course, from time to time,
I try to have them leading the story, like in the Name Hunt Station and the Workshop.

Looking at how the story ended
It looks like Maschenny and Ha Jinsung's story will continue in next week.
It's an unexpected pair..
I hope that there won't be any difficult battle for me to draw, but.. ha ha
Zahard Princess facing one of the influential figures in FUG in this situation,
is far from what you call a peace
(Tears)
The reason why Ha Jinsung's residence is like that although he is a rich guy..
Ha Jinsung has a quite number of houses..
and he seems to be a fan of that kind of natural(?) way of living
He's highly regarded as a danger, too.

Nobody would be curious to know but if I tell what's going on with my personal life
I suddenly gained 2kg this week and am experiencing a mental breakdown for it...
I mean, it was my fault for not doing exercise, but..
I met my mother at my friend's wedding,
which has been a while, and she was sad to see an unmarried bachelor already looking like an uncle.
(I'm sad too, mother)

Ha ha.
So please look forward to next week
And I will work hard in drawing to come back in next week as well
Be careful of natural disasters in raining season,
Stay healthy and have a happy week