??F - Hell Train: The Advent (3): The real Zahard explains to his data self that he seeks to control fate itself, something his more primitive data would not understand. However, Zahard respect his data self's choice to let Twenty-Fifth Baam escape, but he will hold onto Zahard's Bracelet until Baam can challenge him someday in the future.

A gate to the Hell Express appears before Rak Wraithraiser, Androssi Zahard, Phonsekal Irure, and Bero Bero. Androssi uses the Bong Bong to help herself and her team escape through the gate. David Hockney, Boro, and Sachi Faker are transported in front of another gate to the Hell Express. It is revealed that Yu Han Sung (Data) knew about the plan to delete the Hidden Floor and says his goodbye to Batis, saying he thought his time with him was precious, as they both are deleted.

Rachel, White, Ha Yura, and Traveller travel at high speed towards another gate to the Hell Express, but before they reach the gate the Treasure Eating Stingray steals Zahard's Bracelet out of Zahard's hand. All the groups exit the Hidden Floor through the gates, with Ja Wangnan exiting together with Baam and appearing in front of Ha Yuri Zahard and Karaka.

Vice Altar Director and Charlie are standing in front of Zahard's Altar when a new order from Zahard appear. The order has three options; destroy or kill FUG, all the regulars on the Hell Express, or the Po Bidau Family 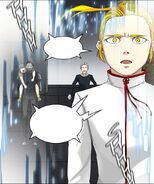 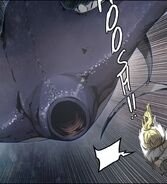 As the author, I would rather prefer them to have a peace than a war, which is difficult to draw..(?) 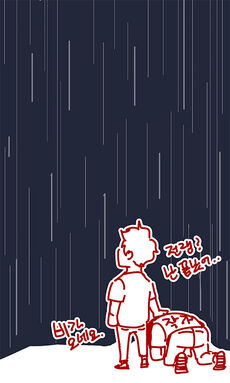 Hi, this is the Season 2 Chapter 308 postscript.
There were some giddy moments…

Like always, this week is about wrapping up the episode and..
a talk about the new episode
It looks like the power that enabled the casts to exit was from the weapon that Wangnan took. (aka the Excalibur..)
Regarding how the weapon will influence the plot..
you have to stick around a little longer
But Wangnan is somehow getting closer to becoming a key of something ^^;
Slowly riping.. Wangnang is a wine-like man..

Due to the rules,
there will be a few variables in the future episodes after the Hidden Floor.
Since Baam used the key to enter,
he was able to bring items with him(including Hockney’s paintings)
The bracelet(?) Rachel got(?) this time will have a huge influence over the story after the Hell Train arc
You can say that the story line afterwards is caused by this bracelet
Surely there is something about the bracelet if Zahard was that obsessed over it.

And about the word w…. ar… at the end of the episode
W.. well, it feels like the scale will get bigger but, ha ha
Hope you can have the patience to see what’s going to happen. Currently,
there is a lot of foreshadowings and flows of the story right now
So I do feel the need to scale it up to carry out the plot.
Still, it won’t suddenly just increase its size, rather,
I am planning to have a few branches spread out and join together with Baam as the center.
Hm.. it will be actually tough doing that but I’ll do my best.
And if it still does not work out, well, whatever..(huh?)

There is a heavy rain today. Feels like the rainy season is coming soon
Last week was a rough week for various reasons.
I wasn’t so sure if I could finish the episode, due to my personal business..
But it’s towards the end of the episode,
so I felt like I shouldn’t let my personal business to obstruct me from doing the work\^\^;
Anyway, I think I have to prepare for the new start.
There will be a rest soon, but.. I hope I can at least avoid the w.. war. Haha

Then everyone, hope you don’t receive any damage from the rain during the rainy season
Even it’s sunny outside, check the weather cast before going out.
Take an umbrella with you when there is a doubt(;;;)
Whatever it is, take care of your health ^^
Now I’ll get going
Have a happy week, and see you next week

Retrieved from "https://towerofgod.fandom.com/wiki/Vol.2_Ch.308:_%3F%3FF_-_Hell_Train:_The_Advent_(3)?oldid=127029"
Community content is available under CC-BY-SA unless otherwise noted.