??F - Hell Train: The Advent (2): The real Zahard is still strangling Twenty-Fifth Baam, while the second Thorn Fragment is creating a gate to another space. Sensing the urgency Data Eduan swallows the Format Pill with the aim to control the formatting in way to release Baam from the real Zahard's clutches. The Data Zahard agree to help Eduan in his plan and charges towards the real Zahard, when Eduan is successful in deleting the arm that is choking Baam.

After having destroyed Hwang, Zahard's tentacles goes after Ha Yura, but Data Urek destroyed them. Data Urek then tells Rachel's team that the Hidden Floor is being erased and they have to leave through the Mirror at the End before they are deleted too.

Ja Wangnan is transported to a room with a floating Mysterious Weapon in the middle, which has the ability to talk. The Mysterious Weapon describes Wangnan as having the "Seed of the King" within him and him being the "prince of the Red-Light district". After their short introductions, the weapon ask Wangnan for some help in a matter, in return it will save his friends. Since most of Wangnan's companions are far away from the Mirror at the End, they will all die when the Hidden Floor is deleted. The weapon promises to grant Wangnan power to save his friends, only if he kills one person for it.

After being stabbed by his data self, the real Zahard ask him why he is helping Baam, an enemy of his future self. The data says that when he first witnessed his future self, he was awestruck, but felt a great anxiety within the great and powerful king of the tower. Sensing this, his data self wanted to give him a new challenge, a new adventure, something new to put his attention to. This adventure has taken the form of the new challenger, Baam. Zahard responds that while he would have thought to accept his fate if eternal adventure was his destiny, he has long since learned to see on the same level as God himself and can now "play with fate", which he deems to be cruel fate.

Wangnan decides to accepts the deal of the talking mysterious weapon and grabs its handle.

Mysterious Sword that can talk 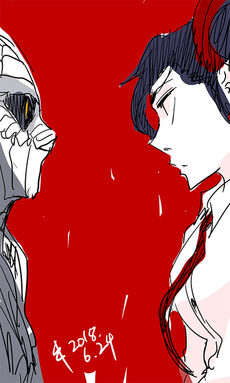 Since it has been awhile to see them, I drew Yuri and Karaka…
It’s good to see them again after a long time ;

Looks like the Hidden Floor is summing up now.


Whether Baam can make his escape, and keep his promise with Gustang,
are still uncertain to this point though ha ha
This episode was kinda introduction-development-turn-Zahard VS Baam
I had a tough time making the story likeable to all..
and keep the balance and flow under control,
but.. Hope you guys will stay tuned until it’s over

Due to what happened, maybe Baam and Zahard’s relationship has become more ill-fated now.
How can I put this, if it wasn’t for their ill-fate?,
which was planned from the very beginning,
Maybe, Zahard in his boyhood and Baam would have gotten along pretty well.
Just like how Wangnan understood and changed Baam when he was Viole,
Eduan and Zahard are actually working very well together than expected,
since the last week. Ha ha

Regarding Wangnan,
my initial plan was that he was going to meet face to face with Zahard’s alter,
However, that would have disclosed some of the stories that have to be saved for the future
Alternatively, I made him to talk with the weapon(?) first, and seize it.
Since it’s Zahard who’s behind the plan after all,
the story would end up similar either way I think.
In my opinion, liking Wangnan requires you to look at the long-term plan ;
(That doesn’t mean what he seized today is the Excalibur)

Around this time is when things other than the manuscript fill my head
But I’m not so sure, it’s not easy since I’m dealing with several other problems.
In these days, having a rest isn’t easy ha ha
It’s tough making the story public-friendly due to the grand scale;
to be honest, some of the aspects under the webtoon system are getting more difficult to cope with.
I’m having more concerns and trying to find a solution.
Regardless, my goal is constantly making a decent work.
Perfection was never my aim anyway ha ha

I want do a good job. It would have been better if I could stay healthy,
but man, the number of my health concerns os only increasing
Good health is the best.

Hmm hmm. Somehow today’s posting is getting long for no good reason.
Since the World Cup is ongoing, I have been watching the national team’s games
Sometimes it was fun, sometimes it was sad.
Still, from watching the diligent players, I find myself get encouraged
Since in foreign football games there is no particular team that I'm a fan of,
I just watch it like “Wow~”
But with the national team,
I cheer them while watching and get indulged into it.
(Personally, I'm very eager to draw a simple football Manhwa when I'm taking a break,
but Naver does not let me do it.. haha)

So guys, for the hot summer season
I hope you can enjoy the hot World Cup,
Along with the hot Tower of God(a tie-in)
For the next week,
I will return with Wangnan who seems to have grabbed something dangerous!
Have a happy, healthy week
Thank you ^^
[1]

Retrieved from "https://towerofgod.fandom.com/wiki/Vol.2_Ch.307:_%3F%3FF_-_Hell_Train:_The_Advent_(2)?oldid=133139"
Community content is available under CC-BY-SA unless otherwise noted.