??F - Hell Train: Power (4): Both Twenty-Fifth Baam and Data Zahard both wake up, with Baam being right next to the last core he readies himself for another clash. However, Data Zahard concedes defeat to Baam and gives him Zahard's Bracelet.

Khun is dying and the rest of his team is scrambling for what to do, since it is apparent that Hwang betrayed them. Data Urek attacks the Scales of the Past and destroys its scales, leaving only the Mirror of the Past. It is revealed that both Hwang want to leave the Hidden Floor and Rachel want to leave the Hidden Floor with her avatar, Icarus, leaving her real body behind. Data Urek Mazino then arrives at Hwang's location with the Mirror of the Past and they put the two mirrors against each other.

Data Zahard reveal that the level will collapse when the scales are destroyed, since it will cause a rapture and allow the little fraction of power of the real Zahard from the outside to interfere with Hidden Floor. A new kind of mirror appears, from which the real Zahard emerge. He then grabs the bracelet and tells Baam, "I thought I killed you before". 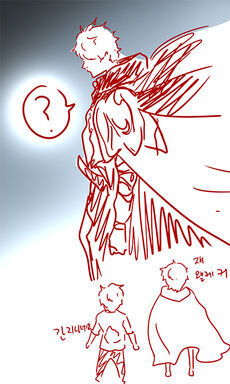 This is the season 2 chapter 305 postscript.


For this week..
I drew kids watching the power of outside Zahard..


Actually, my enteritis relapsed a few days ago
So even now, I am fighting with my stomachache as I am writing this postscript ha ha
Gastritis and enteritis are taking turns to make me suffer(...)


Rachel, this time again, was given a role of backstabbing(...)
But compared to the past, she came off as a more bold villain(?)
She had her own reason.. and was more active in her action;;
Whether that's good or not
Clearly, she is changing.
For various reasons,
I assigned a lesser volume of the story to this side than I originally planned to
So it has become more difficult to make the plot progression sometimes
Still, I will try my best to end it well.

The outside Zahard, or rather, the real Zahard.
Made an appearance a little earlier than expected ^^;
How can I put it.. It feels like the final boss has appeared in front of noobs.
To be honest, it's just a part of outside Zahard's power that's been converted into data,
so saying it's "real" isn't so accurate
By the setting, the ten House Heads are in fact tall and bulky
But this time, I drew him even bigger.
I hope you have felt Zahard's threatening power.

Anyway, the Tower of God has been one thing after another, Zahard after data Zahard
Is it Baam's destiny to suffer no matter how strong he gets
Hope you guys will check it out next week.
For me, I will take a better care of myself.. and return ^^
I feel sorry to readers saying that I'm sick every time
Have a happy and healthy week !
See you next week
I'm so thankful for those who continue reading and visiting me.