??F - Hell Train: Power (3): Twenty-Fifth Baam releases an attack against Data Zahard, which he does not think seem any different from Baam's previous attacks, but this attack removes his right arm. However, the arm also does not regenerate, like it should, which shows that Baam's power truly breaks the system of the Hidden Floor.

Data Zahard is ecstatic, noting that it has been so long since his heart has beaten like this, being surprised with all the power Baam is able to produce. Baam and Data Zahard both bring out their full power, Data Zahard activates Lecalicus third form and Baam attacks with Tripe Orbs Remnants of Stars - Stardust. The clash causes both Baam and Data Zahard to be knocked back and out, with Baam levitating right next to the last orb. They both open their eyes.

Due to the Scales of the Past catching a bug it is transported to the bug room, where Urek Mazino is there to meet it. 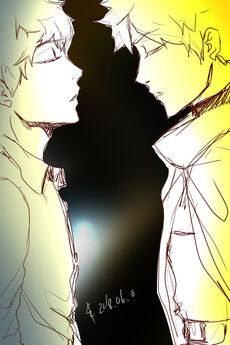 This is the season 2 chapter 304 postscript.


Today’s drawing is data Zahard and Baam who are fighting to their hearts’ content..

Many things happened in this week.
My birthday was last week, too, ha ha(thanks to everyone who celebrated it_ _)
I had some personal business to manage as well..
It feels good to have another week pass by and come back together with the work.

This week…
Baam got op, now he is even throwing some burnt coal like stuff;;;
… He still can’t have a full control over it,
and there is a time limit to it as well
(Just to clear up some confusion.. I don’t mean you lose the power if you leave the Hidden Floor ^^;; just in terms of the duration..)
Regardless, it sure is powerful.

There will be more transcendental techniques involving the thorn,
as Baam collects more of them
I wanted to make some apparent changes
And thought it was a good idea to make the each thorn fragment more unique
But, currently, Baam can’t even handle one of them right ha ha
I got questioned about “How come Zahard and Eduan(data)
have no problem flying but Baam can’t-"
Well, technically, Eduan and Zahard(data) aren’t flying either,
but using shinsoo to make their bodies buoyant and retain it.
They are definitely more skilled than Baam though.
Regarding Baam’s Blue Oars’ new form,
I am thinking of making them accelerate or somehow using them for attacks,
rather than merely helping Baam float.

The battle between Baam and data Zahard is finally coming to its end
I wonder what kind of ending is waiting for them…
It might be something unexpected for the readers though, ha ha
Hope you will be looking forward to next week^^.

Please take care your bodies since the weather is getting hotter,
I heard college students are taking exams, good luck to you guys ^^
And I will be working hard as always
Have a good week
And see you next week.

Retrieved from "https://towerofgod.fandom.com/wiki/Vol.2_Ch.304:_%3F%3FF_-_Hell_Train:_Power_(3)?oldid=133120"
Community content is available under CC-BY-SA unless otherwise noted.