??F - Hell Train: Power (1): After Twenty-Fifth Baam's attack, Zahard (Data) brings out Lecalicus, his needle of war, which is a sign that he considers Baam a "True Opponent". Khun Eduan (Data) wonders if Baam truly is the one Yu Han Sung (Data) prophesied to punish Zahard and stir up the Tower.

Khun Aguero Agnis and Rachel need to find a way to lure the Scales of the Past towards them. Khun goes for the most direct approach and starts insulting the scales. This works to some extent as the mirror enters combat mode, which starts the battle with the scales.

Baam devours the first stage of Lecalicus, which stuns both Eduan and Zahard. Baam then senses that Khun and his group has disappeared, which prompts him to hurry up and release even more power. Zahard notes that Baam is having trouble controlling the overflowing power but now has to be completely serious in this fight. 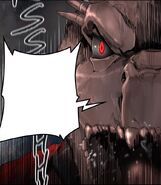 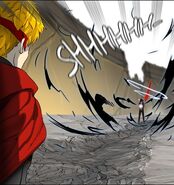 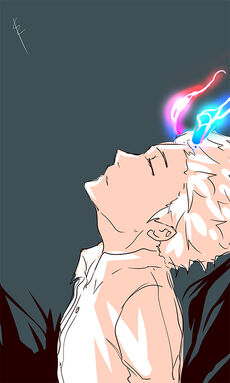 This is the season 2 chapter 302 postscript for the Tower of God.
For today’s postscript drawing,
I drew Baam with a bit of monochromatic color..
The two horns represent Red Thryssa and Blue Thryssa’s power..
You can understand it as Baam turning some of their power into his.

Most of this week’s episode consisted of battle scenes like last week,
so there is not much for me to talk about in the postscript.
Other than Baam is getting super super storng..? Something like that
I sometimes get questioned about how strong Baam is right now..
But I think it is a lot better for others to make a discussion,
like talking about it and sometimes even fighting over it (;;) based on what’s shown
than for the author to define it
Anyway.. aside from Baam’s current abilities,
Baam’s potential is abnormal in the first place,
So I do expect to show more of Baam getting stronger and stronger.
Although it would be far-fetched to say Baam is stronger than 10 Househeads for now..

Who knows, since he keeps growing stronger ha ha,

Like how last week’s episode ended,
this week as well Baam’s strength is being shownas his skills are getting upgraded,
So in that way, maybe some of you will feel this is uniquely interesting.
Personally, among Baam’s skills I want to learn the Blue Oar the most.
I am not even good with those high rides in the amusement park,
but still, sometimes I imagine myself flying over the sky..I think it would be fun if I can have a flying technique.
Of course, in these days, it is quite possible to get shot down as well though ^^;;

So in the following week,
I will be back with Baam who still has hard time controlling his overflowing power
I hope you to be always happy, healthy, and lucky
See you next week~