??F - Hell Train: Tomorrow (4): Twenty-Fifth Baam contiue his fight with Zahard using a Shinsoo Black-Hole sphere inside an Orb, which impresses Zahard. This caused Zahard to finally get serious in his fight and easily push back against Baam, but Baam is able to instinctual block Zahard powerful attack.

Khun Aguero Agnis, Rak Wraithraiser, Hoaqin and Rachel prepare to get the Mirror of the Past's attention.

Baam is still fighting Zahard, keeping mostly a defensive stance. After an attack by Zahard another core is revealed, which Zahard almost gets for himself. However, Baam attacks him with a powerful attack that pushes him away from the core. 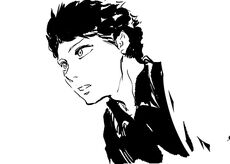 Hi.
This is the season 2 chapter 301 postscript.^^
I felt like today’s Baam looked cool, so here is Baam with his bang up..
To be honest, I think a bit more messy hair suits Baam better ha ha...

Today, I tried to raise the tension in the battle..
It feels like Baam is finally discovering something that is unique to him.
There was always a part of the story portraying Baam’s growth during the Hell Train Arc,
so I think the period to end this all will be beginning now.
I was planning to make him go over his identity crisis
and then after all that time make him stronger the moment he finds the answer
But the way to present or method of doing it was quite difficult..
Establishing the relationship between strength=self-identity was quite harder than I thought
You can say that there is an existing correlation
between the journey to find one’s own self and the combat strength ha ha
Of course, portraying that as naturally as possible was my duty as the director(author)
So I tried to put some foreshadowing here and there and continued making the plot progression,
and here I am now.
Indeed, I still have many areas to work on, but I hoped that you would enjoy this episode ^^;

Now that Baam is awakened(?) with his ability
Maybe he can finally fight even with data Zahard, maybe ha ha
There is still much more stuff to entertain you
So I would hope for you to stay tuned for the next week as well.
There will be new skills and stuff, ha ha.

Although this is unrelated to this week’s episode,
I got food poisoning and had to rest for two days
while I was working on this week’s (preview) chapter ha ha
Anyway, I hope you had fun reading it in this week..
and please look forward to the next week, too
Don’t get sick like me, take care of your health,
And I hope you will have a wonderful week.
Thank you.

Retrieved from "https://towerofgod.fandom.com/wiki/Vol.2_Ch.301:_%3F%3FF_-_Hell_Train:_Tomorrow_(4)?oldid=125533"
Community content is available under CC-BY-SA unless otherwise noted.