Hwang wants to lure the Mirror of the Past into the bug room, where the sworn enemy of Urek Mazino can destroy the scales, which will allow him to use the mirror to escape the Hidden Floor. He is holding several people hostage from both Baam's team and Rachel's team, so he asks for all of their help in completing his plan. And, since both Baam's team and Rachel's need the mirror to escape themselves, they agree to help destroy the scales.

Zahard destroys the first marble and he contemplates whether Twenty-Fifth Baam has given up already. However, Baam attacks him from out of Zahards sight, something that excites Zahard. Baam shows his more powerful form, having activated the first Thorn fragment and utilizing his Shinsoo Orb. 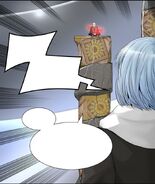 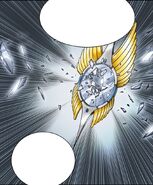 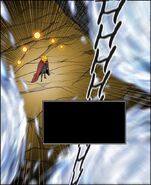 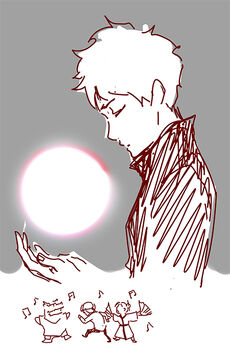 The drawing for today’s postscript is the ball light (orb)
that has gotten brighter and Baam’s companions who are cheerful of the bright light..
It looks like they are having fun.
I hope it will become even brighter.

Anyway, finally season 2 reached chapter 300. (clap clap)
This week’s chapter centers more on team Khun than Zahard…
I expect many people to complain about how long the explanation is
In fact, I, too, thought this episode is too heavily relied on the text to explain the situation
I had thought of an alternative, but it would make the explanation even longer
Which would postpone data Zahard and Baam’s battle for two to three episodes..
Because of that, I took the risk and went in this direction.
In short, I still have a long way to go as an author ha ha.
I have to improve myself

Yellow’s story is the essence of the story of the data world.
The distance between data and human,
Yellow who wants to become a human, etc..
Stuff that I wanted to talk about in many ways
Compared to that, data Zahard’s side is closer to the Tower of God’s main story
I think of this episode as an episode that can foreshadow the future Zahard… through data Zahard.
The battle between data Zahard and Baam
can also be seen as the clashing of the past and the present as ^^;Did I go too far

It feels like we have finally gotten close to the Baam’s growth,
that we have been waiting for.
If you look at it,
somehow the hell train itself is related to Baam’s inner and outer growth
So I believe this episode will be the first end of the Baam’s growth phase…
that’s how I think of it

As always, please look forward to the next week
I will work hard to prepare for the week as well
Thank you
Stay happy ^^
[1]

Retrieved from "https://towerofgod.fandom.com/wiki/Vol.2_Ch.300:_%3F%3FF_-_Hell_Train:_Tomorrow_(3)?oldid=112459"
Community content is available under CC-BY-SA unless otherwise noted.