21F - Flower of Zygaena (1): This is the twenty-ninth chapter of Volume 2 of Tower of God. It follows Team Tangsooyook as they are introduced to the next test, which will have them enter a creature and gather a 'Flower of Zygaena'.

Team Tangsooyook arrives at the testing arena, but the team they're supposed to fight isn't there. The Test Director says that the opposing group was too afraid of Viole and fled. Instead of the normal test, the proctor has prepared a special exam.

Everyone goes out to sea on a boat where everyone is having lighthearted fun; however, the boat suddenly begins to shake and a massive beast emerges from the water. It is revealed to be the Zygaena and the location of their new test. Their goal is to find the "Flower of Zygaena", a precious gem that only grows inside its body.

The team approaches Zygaena by motorboat and splits into two groups. Wangnan, Miseng, Goseng, and Akraptor climb to enter the blowhole on its back while the others stay down. The plan goes smoothly until the engine of the boat dies out just before the creature is about to flip. In a panic, Yihwa accidentally burns the engine while trying to restart it. Time runs out and Zygaena flips right on top of Viole and company.

Meanwhile, Wangnan's group is inside the body and begins their search for the Flower. The scene shifts, then an unknown man with "Mazino" tattooed onto his back is revealed... 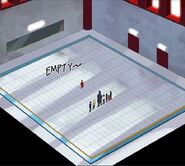 Team at the testing place

Sea at the Inner Tower Borderline on 21st Floor

Going on the test 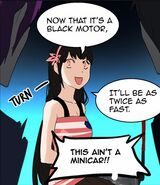 Black motor minicar.
Add a photo to this gallery

Their reputation comes up when you search...

I don't have much to say,
and anything I say will probably end up as a spoiler...

I get a lot of questions about Part I and Part II characters,
but as I've been telling you since a long time ago,
Tower of God is a manhwa that switches the main characters every arc.
It has a slightly different plot style from most other sohnyun (shōnen) battle themed comics,
so please understand, even if it's a little uncomfortable.

By the same principle,
Wangnan's team members from Part II aren't completely the main characters either.
It takes a long time to climb the Tower,
and no one knows what might happen on the way ^^;
Actually, the chances of a Regular becoming a Ranker are smaller than the chances of winning a lottery.
Many Regulars fall, but someone always goes up.

Mmm...
the character who appeared at the end of the chapter...
I can't tell you much yet,
but he's an idiot among idiots.

Retrieved from "https://towerofgod.fandom.com/wiki/Vol.2_Ch.29:_21F_–_Flower_of_Zygaena_(1)?oldid=149021"
Community content is available under CC-BY-SA unless otherwise noted.