??F - Hell Train: Tomorrow (2): Data Zahard and Twenty-Fifth Baam start their fight and Data Zahard quickly overwhelms Baam. Baam goes into himself and remember his second revolution with Khun Eduan, which gives him the confidence to use his own power. After unleashing several attacks Data Zahard finds the first core.

After Khun's team meet with Rachel's team, Data Mazino interrupts and tells them they are going to destroy the Mirror of the Past. 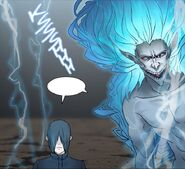 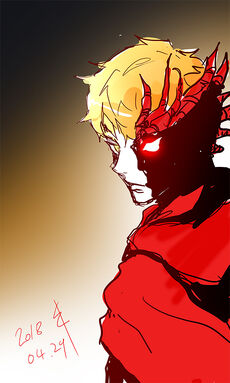 
As expected, he is very diligently beating(…) Baam up.
Since there are a lot of battle scenes,
I think it would be better to just read it and understand it,
rather than having me explain it all
I will not talk too much about the story today.
To be honest, roughly half of the chapter was about Baam getting beaten up(..)
Still, he is trying use a new Orb(?) and stuff,
so let’s just stick around see what happens.
Good luck Baam haha
Yellow is trying to break the scale.
Although I have a feeling that this side of the story would not be so popular.. TT
The protagonist can’t be the only one getting the spotlight,
and I have to make some plot progression as well; so, I will try my best.
When a battle begins, it can’t be helped that the plot progression slows down a bit,
compared to the number of panels, due to the amount of the battle scenes
So, please look forward to the next week, everyone. ^^;


As for my personal business..
Although this should be getting tiring to hear since I say it every week (ha ha), I am sick
Even before I was getting fully recovered from gastritis,
I got rhinitis and had to visit a hospital for it.
It’s good that there are many hospitals nearby where I moved to.
The symptoms were getting worse so I had a difficult time with my daily life,
but after taking the medicines, I am feeling better.
But it gets me worried that I am taking too many medications these days.
Is my immunity getting weaker..

Since I was talking about illnesses… There are diseases in the tower, too.


Depending on the house, they have diseases that they are prone to or immune to.
For some houses, there exist some critical diseases that are hereditary..
Yihwa is immune to most of the diseases, but from time to time she gets light cold.
It suits her since she has fire quality.
Additionally, Khun still can catch cold despite having ice quality. What the..
Regardless, 10 houses usually do not become seriously ill.
They do not even need medication.
Oh, by the way, there is no cancer in the tower.
But there are cases like a person develops an allergic reaction to Shinsu as they get older,
and the cells start to function improperly due to it,
which is quite similar to cancer.
The fact that the chance of one getting it becomes higher
when the person does a poor job in managing their own health is also similar..,
If someone dies of old age in the tower, this is usually the case.

Anyway, please look forward to Baam and data Zahard’s battle,
which will be continued in the next episode
And to our Khun, Rachel, and Urek(?)’s story as well
I heard that many people are having tests,
I hope there are good results to both the ones who still need to take it and the ones who already took it ^^
So have a good week as always,
And stay healthy