??F - Hell Train: Training (9): Khun Aguero Agnis is still fighting with Baam's sworn enemy, when Rak Wraithraiser shows off his progress with his stone manipulation skill. Khun traps the sworn enemy in his ice, when Khun Eduan confronts Rak about his status as a Native One. However, Rak is not aware of any connection the ancient giant. 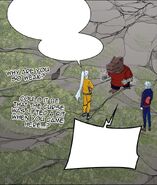 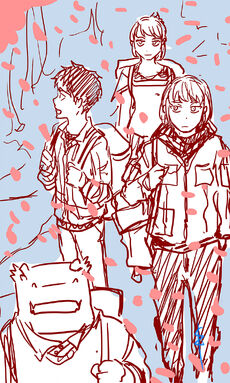 It’s the season of the cherry blossom.


Actually, it has become hard to see the pretty colors of cherry blossom in Seoul,
due to the fine dust in the air Still,
the cherry blossoms around this time of the year always look pretty, and excite me.
Now that I have become an adult,
I can finally realize how impressive the cherry blossoms I had seen as a child,
in Mushimcheon, Jochiwon, and Bomundanji, really were.
Though I cannot go out for the flower viewing in this year as well,
I drew a picture of the Tower of God kids so at least they can have some fun.

This chapter.. from the moment I had stated about the nemesis story..
I wanted to make something sensible out of the existence of Viole and the existence of Baam… Something like that.
Although Baam has not completely gotten out of FUG,
it is still true that Baam had tried to erase the fact that he was Viole, and forget about it..
Viole has a strong image of loneliness, so I wanted to show you the feeling he had felt during that time period,
the more humane aspect of him, and how he accepts it.
Of course, part of his growth in strength came from the Orb,
but I think how the internal growth is kept continued is also a part of the Tower of God ^^;

That ‘bro’ was shown at the end of this chapter.
I am not sure what has happened to him, if he’s data or not,
But it feels like he is going to make this episode more chaotic ^^;

About changing the postscript’s format.. I am still thinking.
There were people who said summing up the episode’s story is fine as well, so.. ha ha
Anyway, please look forward to the next week as well
It has gotten a little cold recently,
but hope it will become a good week so that you can enjoy the spring