??F - Hell Train: Training (7): This is the two hundred and ninety-fourth chapter of Volume 2 of Tower of God.

Rak Wraithraiser turns to rock eating after being outshined by Khun Aguero Agnis.

Data Maschenny gets up again and wants to continue her fight with Data Zahard. 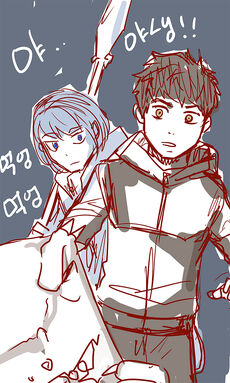 Hi, this is SIU.
It’s episode 294 postscript.^^
The drawing for today’s postscript is KhumBaam curiously staring at Gator in the wild,
who is eating stones..
Now that I look back at it,
maybe I should have made Gator’s teeth as weapon, rather than the spear.
Like, he eats and bone the enemies, and after that,
he has a cool mischievous smile on his face.(Now that’s the 1st generation hard core webtoon right there)
… I’m just joking. I don’t think I can draw that.. I am pretty squeamish…..


It looks like Baam’s Orb indeed suits him
You can probably guess from the Orb’s techniques,
although they are the same Shinsu control techniques from before,
Orb can make them even stronger.
Eduan did not add much explanation since he is OP,
However, by setting, it is rather very difficult to make Orb form with Shinsu and utilize it.
Like all other Manhwa out there,
there are more and more outstanding characters gathering around as the world building progresses,
So it is not easy to point out such setting with details.
Even Khisea, who looked pretty lethargic in this week,
is pretty high-tier among regulars, and can act as a Fisherman in teams.
Anyway, as a Wave Controller it is very advantageous to use Orb when attacking with Shinsu
So it will be helpful for Baam to become stronger.
I am considering making more special features and forms for the Orb later.

I had some thoughts about the Khun’s ice spear
Because it does not fit the balance if Khun can suppress Viole as soon as he manifests his ice spear ability
So I thought maybe it would be better if I can make it more like Khun, playing with(..)
Viole using his techniques
To be honest, the ice spear is still at its prototype stage,
and the true form is yet to be revealed
For the true manifestation of each character’s ability,
I think it’s good idea to stick around a little longer ^^
(feat Rak)

The fine dust in the air is getting more severe, please take care of your health
I always stay in indoor,
so these days I worry about those who work outdoors and feel thankful for them
Everyone, please wear masks when you go out, and don’t stay outside too long.

So guys, stay positive
And have a good, healthy week
Thank you as always
See you in the next week^^
[2]