??F - Hell Train: Training (6): After Khun Kiseia witnesses Baam's attack she instantly surrenders, realising she has no way of winning. Khun Aguero Agnis and Rak Wraithraiser have a harder time fighting Baam's sworn enemy. In the midst of the fighting Rak manages to produce some rocks to defend Khun. However, he is later outshined by Khun that awakens his ice shinsoo, turning his ordinary spear into an ice spear. 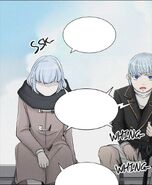 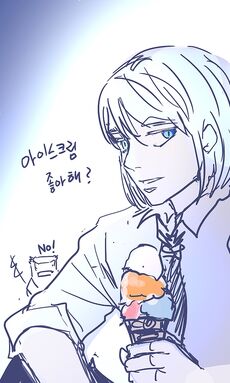 Khun AA who went into ice cream business to use show off his talent .jpg


Today's postscript, just like the story..
I feel like Khun's talent lies more in the business, rather than the ice..
I get the feeling that he will do quite well in business.


This week...
The battle with nemeses has begun.
Nemesis is what is most unique about this episode, so there will be more frequent fights
I wonder if I can tell you each character's story, at least a bit, like the last time... but
This time, I want to focus more on the battles and developments.

Each of them is fighting with their nemeses being swapped,
There aren't really many regulars with the highest level of combat skill other than Baam,
Endorsi, and Sachi in team Baam...
In Khun's case, he becomes OP if he uses Enna Core,
but that should be regarded as an exception
So this time, I thought the story needed some events
that can be the beginning footstep for Khun and Rak to be on the same level,
like having their own abilities.
Anyway, Khun is a character who is pretty good at utilizing or applying his ability once he awakens it.
I will try to make them develop their skills for a long long time.
But of course, personally, if you ask me whether Khun is a Light Bearer or Spear Bearer,
I will say Light Bearer, still ^^;
Regarding that, I think he will find the appropriate arbitration later

Anyway, now we can enjoy Khun's ice spear show (..)
Like the case with Baam' Orb.. and Sachi's vines.. If things like these continue to increase,
As a person who draws them,
sometimes I just want to send them all to the Recycle Bin... Ha ha.
I try to draw them by hand as much as possible,
But I do think about learning special effects as well,
considering the technological advancement.
I don't' have much time.. but, maybe I will use my spare time to study them.

So please everyone, stay positive in this week as well,
I hope I can see you again in the next week, looking good ^^
Thank you as always.
ps. I like cheesecake flavor for Baskin-Robbins.
[1]

Retrieved from "https://towerofgod.fandom.com/wiki/Vol.2_Ch.293:_%3F%3FF_-_Hell_Train:_Training_(6)?oldid=146912"
Community content is available under CC-BY-SA unless otherwise noted.