??F - Hell Train: Training (5): The sworn villains are ready for a fight and Khun Eduan tells Twenty-Fifth Baam he has to defeat his sworn enemy using only his new ord skill.

Data Maschenny takes on an attack by Data Zahard, but is saved by a spell summoning an Armor Inventory created by Data Icardi. Maschenny attacks, but none of the attacks works against Zahard. Maschenny eats a Redan and attacks Zahard again, while Team B sneaks through a tunnel thinking they managed to fool Zahard. However, Zahard quickly takes out Maschenny using his needle skill and then he turns his attention towards Team B.

Khun Eduan pits Khun Kiseia against Baam and Baam's sworn enemy against Rak Wraithraiser and Khun Aguero Agnis. Kiseia does not want to look bad infront of her father and attacks, but Baam's counterattack leaves her speechless. 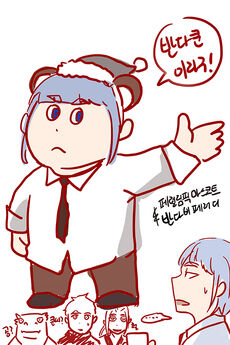 Yeah.. umm… right…
It’s BandaKhun (Now I have nothing more to say)
F.. for the next week… I will draw.. something normal… Haha..
Since it’s the Back to the School season,
maybe a character who is having a new semester or something…

This week..
You can watch the battle between the Jahad and Maschenny + data companions..
And Baam’s proficient (which in reality, he shot it just now) mirrorball control…
I actually had hard time coming up with Jahad vs. Maschenny battle..
For data Mascnenny, she is pretty OP data among regulars
So regarding how close she can approach? get to Jahad,
I had to take sometime to think about that myself..
Jahad’s main weapon is a needle,
but since he thinks Maschnny’s strength is below him,
he does not seem to use it that much.
Data Jahad at this time, feels more like an adolescent boy,
both enthusiastic and defiant.
He was a person who received lots of trust from his comrades.
I wonder how the battle with data Jahad will go.. I start to worry about team Boro.

About Baam’s Orb, after I have finalized the design,
I am trying hard to come up with a plan… skill tree? kind of thing.
What’s certain is that the current Orb is just the basic shape or form,
and what kind of ability it will possess,
or how will it develop later, has infinite possibilities
In many ways, I think Baam suits the image of being focused, or eagerly wanting something
So I want Orb and Shinwonryu to progress in that way
Just based on how much of it has been revealed, it looks pretty broken(…)
Orb.. How can I put it,
it will become the first step to controlling Shinsoo like magic.

If I can add some story about my personal business,
Recently, I am trying to reach harmony(?) both emotionally and physically.
To keep working on Manhwa,
I think physical and mental health should have to come first
Even if I have to spend some time when there is none,
I should start exercising ^^;
Though I have been making that same promise to myself for years now ha ha
I will definitely do it this time.

So hope you have enjoyed reading in this week as well
Please take care of your health, too, everyone. Hope you have a good week.
See you next week

Retrieved from "https://towerofgod.fandom.com/wiki/Vol.2_Ch.292:_%3F%3FF_-_Hell_Train:_Training_(5)?oldid=146911"
Community content is available under CC-BY-SA unless otherwise noted.