??F - Hell Train: Training (2): Data Asensio starts his fight against Jeok, while Data Maschenny and team B tries to find and defeath the champion villian. Jeok tries to send both the stone general and the sworn enemies after them, but only the stone general ends up obeying. Data Asensio and Jeok fights for a while, but it turns into a stalemate. After defeating the champion villian, Data Maschenny returns to Data Asensio ans takes out Jeok in one attack.

Hwang relays to Data Zahard that Jeok was defeated and asks if they should pursue them, but Data Zahards says he would rather wait for them to come to him.

Hope you had good holiday. About data Zahard, if we just install some siege tanks to there... 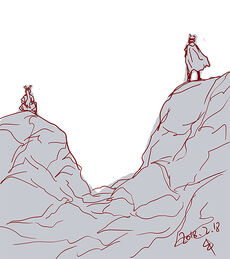 Hi. Have you all enjoyed Lunar New Year day?
I could not take a break since I was working like I did last time..


Hope everyone has rested well and re-energized themselves during the holidays.


This episode.. Looked like Asensio was the main character but it turned out Maschenny was(..)
Both Asensio and Maschenny are characters who will appear later as well
So perhaps the techniques in this episode will be shown again as their adult versions(?) in the future.
By the way, I want to mention that I personally do not like
Asensio’s Flying Fish spear techniques, due to its difficulty to illustrate
Maschenny is the best, finishing things in one shot.

It looks data Zahard got too lazy to chase them and decided to wait instead.
I originally intended to put some stories with quests in between,
but I have changed my mind thinking I cannot draw themwhen the development is already slow. So I dropped them a lot haha.
Therefore, there will be a lot of progress with the training the next week.

For data Zahard, aside from the fact that he is strong
His ability to analyze situations, and survive and stuff, those skills that are required in adventures,
are all close to the highest possible level
Although he is data from his younger self, he sure does look invincible.
I wonder how is Baam going to be capable of dealing with data Zahard...

Anyway, unlike previous episodes,
I will show you battle scenes of many characters one by one
So it will be more detailed, sorta..
I will try to make you have that kind of feeling

So please look forward to the next week
The season is going to change soon, so please take care
I hope every athlete going into the Olympics will get good results
I am thinking of drawing a character dressed as the Winter Olympics’ mascot,
Soohorang, in the next week’s postscript… Ha ha
Not sure who am I going to draw, but…


Thank you! Have a wonderful week
[1]