??F - Hell Train: Zahard's Data (4): Zahard lays out his term for accepting the bet against Baam. These are: He decide where they fight, when he wins Baam have to tell him who he is, and if Baam does not show up he will kill them all.

Hwang tells Ha Yura about her past and by Zahard's orders he takes one of Baam's companions and Ha Yura hostage, while bringing Yura's mirror fragment with him. Khun Eduan chats with Baam before the training begins and Zahard goes to kill Khun Eduan's children. 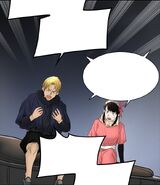 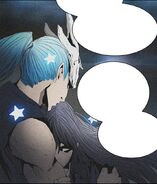 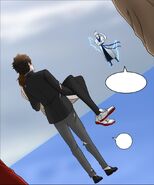 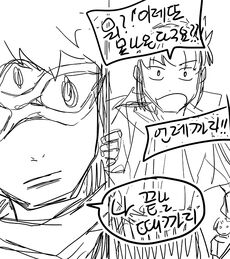 One panel for Yihwa since I am glad to see her.
It’s been a while…
See you again later.

This episode.. it was hard putting them all in one episode..
There were few other ways, but it would’ve disrupted the flow, so I made up my mind;;
Together with the last episode, I decided to do one episode for battle,
and one episode for summing-up.
This episode did not have fighting scenes so the lines got longer..
But I hope you enjoyed it.


The main focus is, of course Zahard and Baam
But Big Breeders are villains of this episode,
and at the same time they are special beings (data) that only exist in this episode..
So I wanted to give them some backstories..
Since it’s an episode that’s happening in the Data world, I thought,
“How about this kind of past-.”
The fact that Yura has a connection to the Hidden Floor has been previously foreshadowed for a moment,
But the first draft was a bit different from now.
It has been changed a little by little and became this story.

Data Zahard, it’s hard to get a grasp on his personality, but,
(As Eduan said,) currently the data is in strange state ha ha
You can see it as the original Zahard’s personality
is mixed with another personality that was altered by something that came from the outside..

In reality, Zahad’s character is far from seriousness or authoritativeness,
but more of a genius adventurer.
Of course, for some reason he changed after becoming the king ^^;;


From the next week, the episodes will be showing Baam’s training and confrontation?
between Khun family and Zahard’s side
I think there will be a high proportion of battles for a while.
Baam needs to upgrade diligently to survive one month after..


Anyway, the weather has gotten cold again,
please take care of your body and be careful not to catch a cold
For those whose schools have started, hope you can adjust well,
Be happy, and have a good week
I will keep working hard for Manhwa.
Thank you
See you in the next week ^^