??F - Hell Train: Jahad's Data (3): Jahad questions Twenty-Fifth Baam as to his identity, and demonstrates his version of the Shinwonryu, while threatening to kill Baam's teammates in the event that he didn't answer. Baam tries to get Androssi Zahard to help the others to safety by using Bong Bong, but she seems to be paralyzed by Jahad's presence. Jahad then proceeds to destroy the Town of The Golden Dome, but his attack is intercepted by the data of Khun Eduan.

Eduan brands Jahad a "fake", noting that the Jahad he knew was an adventurer, not a king. Data Yu Han Sung proceeds to thank Eduan for keeping his promise to him. Eduan then proceeds to ask Yu Han Sung to identify the boy that he had promised him, and proceeds to order Asensio to help Baam's team escape by using the magic mirror.

Jahad attempts to prevent the escape, and is once again intercepted by Eduan. They proceed to attack each other using Shinsu, which culminates in Eduan's Giant's Lightning Spear canceling out Jahad's Golden Needle from Mystery Island. Aguero is awestruck by this display and power and begins to wonder about the strength of the 10 Great Family Heads after they became rankers.

Eduan then asserts to Jahad that he could train Baam to be stronger than Jahad in a month, and offers to delete himself and reveal Baam's identity to Jahad if Jahad was able to beat Baam at the end of that time period. Jahad accepts this wager, and orders a stage to be prepared for the upcoming battle. 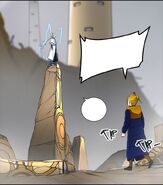 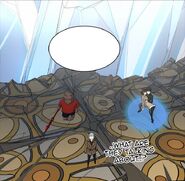 It will continue.... not in a month but next week 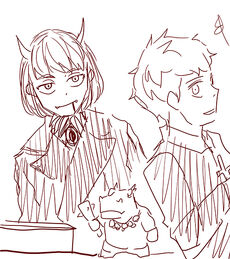 This week’s blog post image is kind Halloween themed that I could not do last time… Wobbly..
Cold. So cold..
After going to my grandmother’s 49th day funeral, I still have a cold.


It was done in such a cold temple so..
Everybody, please take care..

This episode.. looks like the 10 House-heads were overwhelmingly strong since they were young.
Eduan is.. like Ran’s ultimate form ^^;;
There is a saying, “The apple doesn’t fall far from the tree…”
Eduan is using electricity with no limitations at all,
looks like if you live in Eduan’s country,
you don’t need to worry about the electricity bill during the summer..
Actually, Eduan who became the outside 10 House-head,
did have an instance where he covered the capital with lightning generating storm clouds.

For Jahad.. He seems to be using lots of gold-colored Shinsoo attacks.
The ‘Gold’ in the name of Jahad’s attack,
is similar to the gold in our world but a different metal
You can think of it as a gold that is unbreakable like diamond
Regarding the Shinwonryu in the beginning,
I think I can tell you what it really is some day.

The manuscript was quite long so I was thinking whether
to divide this battle scene into two weeks of episodes, or just get done with one week,
And I chose to get done with one week and proceed with the suesequent content faster.
Since there is a long way to go ^^;
Anyway, looks like data Jahad and Baam’s first encounter is ending.
I wonder when will we get to meet with the outside Jahad haha

Personally, my wrist had suddenly gotten worse during the weekends
(I don’t notice it while working,
and then it often becomes swollen after I am finished with the due date.
This time it’s lasting longer than usual)
I am having lots of concerns because I am in bad shape from the cold as well.
So many ordeals these days I guess haha
This is usual, but since I am in a delicate state,
I will write an announcement right away if there is any change


So everyone, I firmly wish for you to take care
And have a good, fun week.
I will be back together with Baam,
whom I will worry for after this one month has passed
Thank you. ^^

There are several ways for Koreans to do the formal funeral. The 49th funeral has been originated from Buddhism, where one does the funeral again on the 49th day after the person’s death.

Also, SIU had answered to the questions I had asked him, regarding the Jahad’s attack and Shinwonryu. If you had not read the original thread, click here.