??F - Hell Train: Zahard's Data (2): This is the two hundred and eighty-fifth chapter of Volume 2 of Tower of God.

The chapter begins where it left off last chapter. Baam asks the data of Zahard as to who he is. Zahard then answers that he will be the one who becomes the king. Baam, suprised, understands that the one who he is talking to is the one and only Zahard, who continues to describe himself while slowly advancing on his way to Baam. He then stops walking and finishes by saying his name. Rak senses that Baam is in danger, and so he jumps off the balcony that Androssi is still on, and tells her that he is danger and to hurry.

Zahard tells Baam that he expected more of a scared reaction from him. Zahard in turn questions Baam. They both talk about the outside world and where they come from, all this while Zahard is approaching Baam. Baam follows the conversation by asking if Zahard knows who Arlen Grace is. This provokes a reaction of surprise by Zahard, which despite this says that he doesn't know who is Arlen Grace.

Meanwhile, somewhere else on the hidden floor, Rachel finds Hoaqin and Traveller by sensing them. She says their name loudly, being shocked to see them. Traveller tells her to be quiet and Hoaqin asks who she is, but Rachel wonders of how she is supposed to tell them who she is. Due to the lack of response, Hoaqin quickly drops the matter and tells her to be quiet because something important is happening. Rachel wonders what is important, as they seem to be watching something ever since she arrived, and so she joins them. She sees Ha Yura, who is facing a guy who looks a lot like Ha Yura.

Baam yells at Zahard, saying that it is impossible for him to not know who Arlen Grace is. He responds to him that he doesn't know her anymore, and then in turn asks Baam about how he got this name. Zahard then tells Baam what it is to be a king. Continuing, he transforms, with red horns growing out of him, asking Baam if he sees a human being or a monster. Baam seems to be scared as he sees the monster within Zahard growing out. Zahard is then back to his normal self. Baam starts running towards him, prepared to attack him. Rak sees the attack coming from the dome and crashing outside. Khun and the data of Yu Han Sung also hears the explosion.

Zahard effortlessly blocks Baam's Wave Explosion with one hand, noting that Baam has very decent skills but that his attack is too light. Baam questions himself as to why he attacked him and proceeds to back up. Zahard says that he will show him something better. He rises his hand and creates the Zahard Style Wave Explosion : Iron Fist. Baam is overwhelmed by this attack and the glass of the dome's windows has cut him badly. After explaining his way of doing the wave explosion attack, Zahard once again interrogates Baam.

Androssi arrives with Rak using Bong Bong. She is then stunned by Zahard's presence. Zahard says that he changed his mind due to the irritating intruders that arrived, and that he will do something a bit more extreme. He follows by threatening Baam, saying that he will kill him if he doesn't respond and that his companions will be killed if he doesn't say the truth, by making them disappear with a Shinwonryu attack.

In the Palace of Spears, the data of Khun Eduan jolts all of a sudden. He proceeds to command Khun Marco Asensio to give him the mirror that leads to the other side, thinking that Zahard might be making a move.

Fight scenes are the most fun, so next week I'll need to prepare some popcorn.[1] 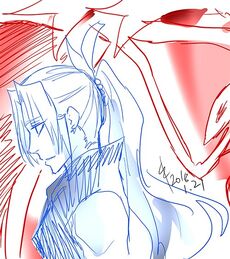 
This is the Season 2 Episode 285’s postscript.
Today’s drawing is Eduan and Zahard’s data,
who made the appearances at the end of this episode..

Some people say “Why are you making drawings for postscripts when you are in bad shape”..
But, Compared to how long ToG has been publishing,
there isn’t much merchandise to buy
So I feel bad about it,
and try to show various portrayals of the characters in the postscripts at least.
That’s why I am receiving requests and stuff..
I do try to find other ways, but things just do not work out like I want them to ^^;
As I am concerned about these and trying hard by myself,
I hope that some day in future, others can learn about a Manhwa called the Tower of God
and they can be with their favourite characters anytime and anywhere.

This episode..
Maybe it’s because he’s wearing the President Pororo’s mask, data Zahard is indeed strong.
About data Zahard, readers who had read today’s episode probably have noticed,
Gold is his signature color.
Like Arie’s silver white, and Khun’s blue..
It will revealed in the future, but these colors have close relationships to Shinsu that each Househeads use.
For hair color, the case may or may not apply…

Anyway, despite his playful appearance, Zahard has beat up a kid..
Baam is indeed a bold person, as soon as he meets data Zahard,
he messes with the most delicate part of Zahard.
Well.. as a result he is beat up quite badly in this episode ^^;;
Baam should grow up fast and become someone similar to the 10 Househeads.

SIU had mentioned Pororo twice in the posts now.
So I will briefly explain what Pororo is for those who don’t know.

Pororo is a popular kids show in Korea,
and also the name of the show’s main character.
The character became so popular with kids,
and has been nicknamed as “the President Pororo.”

Google Pororo and you will see what he looks like.
Pororo’s goggles became SIU’s inspiration for Zahard’s mask.