??F - Hell Train: Zahard's Data (1): Khun Eduan reveals that all the people who traveled to the hidden hidden floor were deleted leaving only the Big Breeder. After talking with Khun Eduan, Baam's team continue to travel through the stages.

While traveling through the stages Khun Aguero Agnis is pressured into revealing his relation to his sworn enemy. After he finishing telling them his backstory, Khun pushes for Androssi Zahard to reveal her relation to her sworn enemy. She says that she is happy for what the Snake Charmer did to her, but both Khun and Baam can tell she is not telling the truth.

They arrive at the Town of The Golden Dome, where Rachel notices the presence of someone. She quickly precedes to excuse herself to look for this person that she thinks might be Ha Yura. The rest decide to split up to look for the rest of their companions. Baam ends up alone inside the dome, where an Data Zahard confronts him. Rak Wraithraiser notices that something is wrong a rushes towards Baam. Baam does not know who is infront of him until he introduces himself as Zahard. 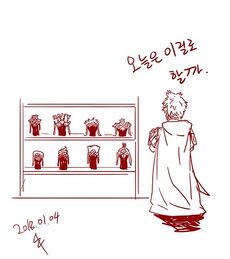 Hi, this is SIU. ^^
This is the Season 2 Episode 284 postscript.
Even though it’s not long, writing postscripts every-week
And checking how you guys have responded after,
is always something to look forward to.

The drawing is that someone who had appeared in this week..
Data Zahard… Uhm I had lots of thoughts
I had decided to cover up his face from the very beginning
At first I was planning to just digitize his face.. (because it’s data)
But then there will be a problem with editing..
and it won’t look good, so I changed it to the mask instead.
"It would be nice if the design for the mask is based on
Three Red Eyes and make Zahard wear goggles like Pororo’s-"
That was what was inside of my head.. And it turned into the current design.
I am not sure if you will like it ^^; But I quite like it myself.

For data Zahard, rather than making his first impression overwhelming or something like that
“Huh, actually he feels kinda familiar but in reality he is a great person?”
Maybe that sort of feeling…
Anyway, even though outside Zahard is an overwhelming being himself,
I tried to avoid portraying data Zahard in that way
For current data Zahard, I wanted him to be less of someone who was extraordinary
from the beginning that had entered the tower,
but more of just a traveller called Zahard who used to be full of potentials,
and is now on his way to become someone extraordinary,
and during that process,
you can feel he is having mixed feelings such as confusion or fear
I hope I can draw him that way
However, by no means he was a late boomer.
Zahard and 10 house heads were all geniuses with great talents.

About the shown pasts of the characters,
they might provide clues to future episodes.
Since the characters will grow both inwardly and outwardly as they climb the tower,
Maybe I gave you hints about what will happen in the future, I think that way.

This week’s postscript turned somewhat wordy
I always regret writing wordy things
But I feel like it just ends up long when I am writing;;
I might need to hold myself back
Therefore maybe I am going to write a short one for the next week..

Recently one of my organs was found to be bad so I am getting medical examination.
Lack of exercise is bad in various ways.
I had been quite healthy before^^;;
Anyway, becoming healthy is this year’s goal for me.
Maybe I need to get some personal training..

There had been lots of snow, so please be careful
Those students who are probably having break, I hope you are having wonderful breaks
Have a good week!