??F - Hell Train: Khun Edahn (6): There seem to be some deep resentment between the Khuns, since Khun Kiseia revels in hurting Khun Aguero Agnis.

Rachel uses her abilities as a Big Breeder to help Baam's team find the exit of the maze.

Khun is gravely hurt by Kiseia, but manages to save Yeo Miseng, which Kiseia says seems out of character for him. They then teleport away to the main group and travel together to the area between stages. Rachel offers to heal Khun, which she does using the powers of the Big Breeder. Data Yu Han Sung notices the bracelet of the Big Breeders on Rachel and Khun is still quite suspicious of her. Kiseia gets frustrated that Khun escaped and the Big Breeders offers to help her get revenge.

Khun Eduan meets with Team Bero Bero and he explains the history of the mirror world. He also mentions that the hidde hidden floor was created when Zahard visited Data Zahard and was supposed to be a space for the 10 great family leader away from all the normal regulars. However, Data Zahard changed after being visited by Zahard. He seem like his normal self on the outside, but he had change deeply on the inside

Data Zahard is shown video footage of Baam's progress through the hidden floor and says he'll take care of Baam himself. 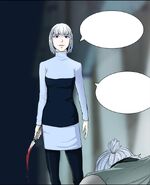 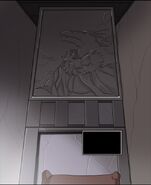 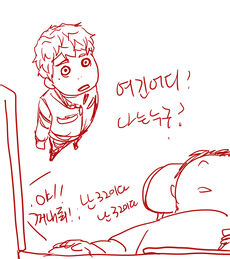 Hi, this is SIU.
It is now 2018 ^^
I still cannot accept the fact that I am 33 years old now. Ha ha.
I should be hurry and make a plan move to a town somewhere in the Mediterranean area
And go back to being 31 years old.. It probably won’t happen because I have no money lol
(tears)
Anyway, I hope only good things will happen a lot this year.
Now I, too, have come to an age that needs to worry about the future.

About this episode..
Well, Koon somehow survived again
It’s difficult to draw him so how long is he planning to live.. I was joking.
Love you my little ba*tard.


The sworn enemy.. is determined by one’s image of that sworn enemy according to the system
So if someone thinks ’my sworn enemy was better skilled with a knife than I am’
It is safe to assume that it will be exactly reflected on the sworn enemy.
I like Koon’s sworn enemy because she is fun to draw.
It’s kinda like dual personality, too ^^;

There have been several plot foreshadowing?
somewhat But because of the long-term characteristic of the work,
whether the things that were foreshadowed will happen immediately
or will take very long time to happen is hard to say.
But for this episode, I made the world and planned the conflict, climax, and resolution
So in terms of being complete, the episode might be better than previous episodes..
I think about it that way. However, the volume of the episode itself can be quite extended with that kind of process ^^;
I think these long-term episodes are too risky of a gamble
considering the rapidly changing world of the webtoons..
But I still can try.

Also, Zahard’s data, who had been only showing back of his head, has finally started to move
Depending on how you look at it, this can be the beginning of the Hidden Floor’s main story.
There are still many important and interesting stories left, so please look forward to them ^^

So stay happy in 2018 as well, and have lots of fortune.
I, too, had many hardships,
but I will try to find my own way, answer, and happiness.
Thank you.
See you in the next week ^^

Bunny’s note
Korea has a special way to calculate a person’s age.
Basically, you are 1 year old when you were born,
and everyone gains 1 year when a year passes,
not when their birthdays pass.

Retrieved from "https://towerofgod.fandom.com/wiki/Vol.2_Ch.283:_%3F%3FF_-_Hell_Train:_Khun_Edahn_(6)?oldid=146564"
Community content is available under CC-BY-SA unless otherwise noted.