??F - Hell Train: Khun Edahn (5): The Big Breeder Jeok ponders what to do next when Big Breeder Hwang contacts him. Hwang gives Jeok some orders, clearly marking the difference in authority between them.

While in the area between stages Khun Aguero Agnis and Data Yu Han Sung are discussing the strategy for the next stage.

Team Bero Bero after several days finally reaches the resident of Khun Eduan, the palace of spears. Data Maschenny greets them and guides them to Khun Eduan, who refers to Twenty-Fifth Baam as "Son of V".

Team Baam is defeating the villains on stage 7, when Khun is called by his sworn enemy Khun Kiseia, who have taken Yeo Miseng as a hostage. She challanges Khun to a fight, which he agrees to. They fight for a while and Kiseia gets in a good wound on Khun, when she calls him a murderer. 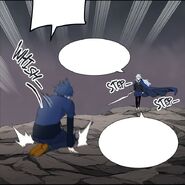 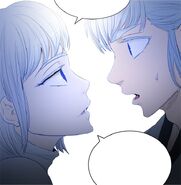 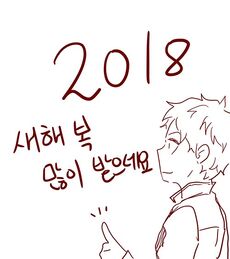 It just so happens that I start the year 2018 with my manhwa.
I will write my postscript for Season 2 Episode 282 hoping that this is going to be a good start.
Everyone, Happy New Year
It’s quite noisy outside right now.

Khun’s nemesis… has appeared.
She calls him brother, so it looks like she is a member of his family
But, where using a knife is concerened, she seems to be more skillful than Khun ^^

If all things go according to plan, I think I will go into every nook and cranny of the Khun family’s story in the future
But it will be difficult to do it all at once, so there will be little bits of it every now and then
Since the Hidden Floor’s main focus is the past, the main story for regulars, Eduan,
and any other characters, will also be the past as well.

Year 2018… When I first began ToG, I had never expected that I will keep it up for as long as for 2018, but looks like the day actually came
Working on manhwa, feels so good someday, but then on other days, it can feel dreadful
Looking back at it, it all looks like more than what I deserved and just miraculous
Anyway, for now my current goal would be an author who can say “Hi” to you in year 2019 as well

+In the beginning of the next year, the legendary physical edition might…

I will try to come back with a fun webtoon as always in the following week!
Next week, maybe you will learn the fate of Khun who has collapsed..?
I hope everyone is going to have great fortunes and be happy for the new 2018
Thank you^^

In Korea, fortune 복 is a big part of the culture.
So we say “Have Lots of Fortunes for New Year 새해 복 많이 받으세요,” instead of just “Happy New Year.”

That’s why SIU repeatedly mentions fortune. Hope you will have a lot of it as well :)