??F - Hell Train: Khun Edahn (4): The Snake Charmer grabs the villain and pierces the skull killing it instantly, easily finishing the grand quest. Phonsekal Irure noticed that it was Khun Aguero Agnis that stole the villain and she thinks that the Big Breeder might be the actual enemy.

Rak Wraithraiser doubts Rachel's motives for helping them. She gets on Rak's good side by offering a better spear, which she uses as just an excuse to get on their team. It is revealed what kind of deal Rachel struck with Chung, where he will help her defeat Data Zahard in order to escape from the life of a Big Breeder.

Jeok is fighting Data Yu Han Sung and Khun Aguero Agnis, while doing so Jeok does a massive attack that is spotted by Baam, Androssi Zahard, Bero Bero, and Phonsekal Irure. This brings them all together in front of the Big Breeder and they all escape to the next level together.

Rachel claims to be the Big Breeder's sworn enemy Icarus. Khun is suspicious of her, but lets her join their team. We are introduced to Khun's sworn enemy, Khun Kiseia. 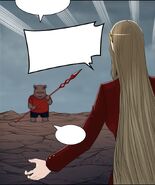 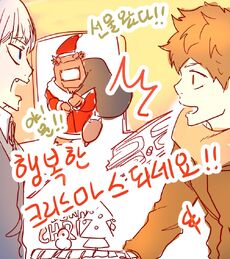 Hi, this is SIU.
This year, Christmas was my deadline by coincidence.
I do not have much time these days, but since it’s Christmas, I did a small drawing ^^


Let’s start with this episode’s story.
The Big Breeder in today’s episode.. unlike Chung,
Looks more decent? Somewhat.
The skills used by Big Breeder are considered omnipotent in the Hidden Floor
So unless you deal with the actual cause, it is pretty difficult to win against
But looks like team Baam handled the crisis very well this time.

Villains have been continuously appearing and disappearing
It actually did not mean much whether the protagonists saved them or
killed them because they are just summoned monsters.
The only difference is that some of them are visually appealing and some of them are not;;

This week looks like it is the last episode for 2017.
There is next week’s episode, too, but for that one, I have to call it Happy New Year.
Anyway, 2017 is now almost done.


For me, the year 2017 is…
Every year, I always thought about my plans and how I can improve my work for the following year
But for this year, I was very concerned with the lifespan of ToG, whether it can be continued.
The publication rights issue stressed me a lot in the beginning of this year,
and with both my mind and body half gone I had to deal with some very bad situations..
There had been some serious talks about ending ToG as well.
Because of that, the anxiety of "If I stop drawing ToG at some point,
maybe I will never come back to it again, and it will be gone from everyone’s memory.."
was always haunting me.

So for this year, rather than criticizing myself for how many views were there,
how were the responses from people,
I just want to pat myself of 2017 in the back that "You did well and you did a great job."
There
For me, 2017 was the year of surviving and surviving.
Since I have survived, I believe that the future will be better.

Next year every bad thing will be gone and only good things will happen
So I can continue working, with a bit more time to spare.. I hope ^^
I wish for happiness to both you and ToG.
Let the good fortune and happiness fill your families and lives.
Have a good holiday, week, and day
End the year 2017 with happiness!

Bunny’s note:
Somehow the new Big Breeder’s name is translated to “Enemy” in Line. However, both of the Big Breeders names actually mean colors. Chung 청 is “Blue” and Enemy, which is Jeok 적 in Korean, is “Red.”
I think Line was confused because Jeok is Korean homonym for both “enemy” and “red.”


+ I always try to fix mistakes and edit the translation even after posting, but this time, I actually skipped a whole paragraph. I'm so sorry for my carelessness.
[1]