21F - FUG (2): This is the twenty-seventh chapter of Volume 2 of Tower of God. It shows Jinsung meeting Viole's team and Viole being revealed as Baam, the Irregular.

Yeon intrudes upon Viole's meeting with Hwa Ryun. As she wonders who the woman is, a mysterious tall man enters the bar. He openly tells Hwa Ryun that only the three of them should be meeting here, leading Yeon to deduce that Viole is meeting up with other members of FUG. The man thinks she's a spy sent from the 10 Families, but Viole says that she's an ally; however, Yeon becomes irritated at this and shouts at him, telling him that he's a liar and a traitor to the team. The guy becomes angry at her insult and Viole tells her he's a High Ranker, but Yeon continues yelling. He is forced to knock her out before anything else happens. In the end, they decide to have a meeting at the house Viole is renting.

Viole and his cohorts meet with Wangnan, Miseng, and Goseng. The High Ranker introduces himself Ha Jinsung, a member of FUG. His purpose here apparently is to check up on how Viole was doing in the new team. A comedic discussion ensues between Jinsung and Wangnan.

Meanwhile, Akraptor is in the kitchen with a recovering Yeon. He says that FUG is nothing like he expected and that the rumours surrounding Viole were spread by his impersonators. Yeon still tells him not to trust him, to which Akraptor responds by asking why she's still on this team if she hates FUG so much. He heard from Wangnan that she cannot control her strength and deduces that she's afraid of being rejected. Yeon suddenly becomes sullen, but he tells her that she's a trump to this team and that Viole can always restrain her when needed.

Back in the living room, Jinsung is showering Viole with praise, saying how he's never met anyone like him. The High Ranker then notices that Viole isn't in the room and goes off to the roof to meet him. At the same time, Goseng leaves to put Miseng to bed. Wangnan and Hwa Ryun are now alone in the room.

As Wangnan attempts to strike up small talk, Hwa Ryun congratulates him and his team for surviving. She reveals that Jinsung came not only to meet Viole, but to also kill his current team and form an entirely new one compatible with Viole's talents. Although she says they are lucky now, Hwa Ryun tells him not to lose his guard since some in FUG are not satisfied with the situation. Wangnan asks if she truly thinks Viole can grant FUG's wish of killing Zahard. Even though he may be talented, he recalls Zahard having a contract that makes him unkillable by the residents of the Tower. Hwa Ryun tells him that what he says is true, but she reveals that six years ago FUG found a boy who was entirely free from the contracts...

The scene shifts to the rooftop, where Jinsung calls out to Viole, naming him "Baam. The Irregular".

Hi, we're FUG. All your stuff is belong to us. 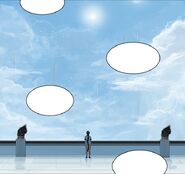 End of the controversy.

The moment Viole's bangs get out of the way, he transforms into Baam.
Viole, the world's first haircut transformation magic girl.

Actually, my condition was the worst while drawing this chapter--
I had headaches due to the heat and I was low on energy.
I was working on the plot but I couldn't think of anything as my mind blanked out.
After I grabbed my notepad and got a grip on my mind, it was already 3 days to the deadline kekekekeke.

In the end, I couldn't sleep and had two nosebleeds...
it was truly the worst experience.

To Mr. Global Warming, who gave me this experience,
I want to send a Siberian mountain-sized fuck-you. ^^
I was considering taking a week's break for the sake of work,
but it hadn't been very long since I took a week's break(...)

So I ended up drawing the rough copy like a company worker who had to write his yearly report at a bad time haha.

I'll end my personal ranting there.

(One day I shall get sick and take a break.)

In this chapter, I revealed the reason why FUG approached Baam,
although it's something you would've noticed if you read carefully.
In shorter words,

"Due to a contract with the Guardians, Zahard cannot be killed unless you are an Irregular".

Ha Jinsung, who appeared in this chapter, is from the Ha Family.
In terms of the family tree, he is waaaaaaaay above Yuri.
As expected form a Ha Family member, he is good at martial arts and is very strong. Haha.

Actually, besides Regulars, only people with permits can enter the Regulars' district.
Hwa Ryun was only able to enter and bring Ha Jinsung along because she is a special Guide;
Rankers and High Rankers are actually forbidden from associating with Regulars.
Of course, FUG is a random bunch so they don't care about the rules. ^^

Actually, I was going to throw all the past events in the next chapter,
but it looked like most of you readers wanted a speedy advance in plot so it looks like I'll include just a little bit of reflection on the past and focus on the Wangnan team.
In fact my condition is bad these days so the length of chapters may decrease.

Then, please read and love the chapter next week too, and I must go to sleep. ㅠㅠ

Retrieved from "https://towerofgod.fandom.com/wiki/Vol.2_Ch.27:_21F_–_FUG_(2)?oldid=149019"
Community content is available under CC-BY-SA unless otherwise noted.