Team B are greeted by the quest scroll monster dragon, but Batis tells them they need to do something before doing the next quest. Batis gets help from the rest of team B to get on top of the straw in the giant iscream cone, where he proceeds to yell down the straw. He yells that the person that Han sung promised has arrived and he hopes Khun Eduan will help in the fights against Data Zahard and the Big Breeders. Khun Marco Asensio ask Khun Eduan what do, which he replies that it looks like a fight is approaching. 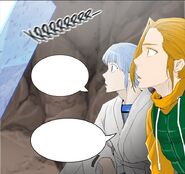 Hi, this is SIU.
Due to my family issue, it is difficult for me to write a long postscript.
For those of whom were waiting, I am so sorry.


This episode featured the story of team Baam and Eduan.
It looks like there is a possibility where this world’s Eduan have a confrontation with Zahard.
Big Breeder and Eduan’s stories will probably be continued in the next week.
I wonder who’s the new Big Breeder..
I hope you will be exited about what will be the next stories


Also, My dear grandmother, whom had always protected me and helped me
I hope you rest in peace.
I love you.


I will try to come up with an interesting story and postscript
In next week as well
Please take care, and have a nice week

Retrieved from "https://towerofgod.fandom.com/wiki/Vol.2_Ch.279:_%3F%3FF_-_Hell_Train:_Khun_Edahn_(2)?oldid=127000"
Community content is available under CC-BY-SA unless otherwise noted.