??F - Hell Train: Khun Edahn (1): Khun is shocked that he would meet his father so soon, but Han Sung calms him down by telling him that his father won't recognize him anyway. They decide to split up into two teams, where team A goes into the next normal level, Cold Land, to find their companions, while team B goes to the secret level, Sweet Castle, to find Khun Eduan.

Rachel agrues with Chung, where she wants to go after Baam, but Chung wants her to stop since he can get in trouble with the other Big Breeders. She finds about about Chungs wish to escape from the hidde hidden floor and decides to make a deal with Chung.

When Team A enters Cold Land they see Bero Bero and Phonsekal Irure doing the grand quest for the Big Bredeer Jeok. Meanwhile, Team B enters Sweet Castle and Khun Eduan is indtruced. 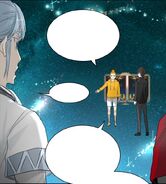 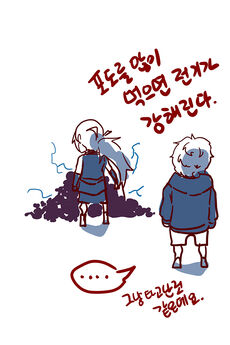 It’s season 2 ep 278.
I did this simple drawing for this episode as usual..
Personally I had a lot of stuffs going on around me


But I am trying to stay focus on work restlessly as much as possible.

Data that looks like the God of Grape? .. has appeared.
Perhaps his name is Koon Eduan..
Anyway.. because this is a younger version it is different from the future version..
But Baam’s party might as well change gradually.
Koon Eduan as data looks like sprite haha.
Well, the reason why he was holding grapes when made the appearance,
is because one of the gods who became an inspiration for Eduan is Dionysus.. so,
Among the 10 house heads, he is the one in charge of dissipation,
hedonism, womanizing, charming look + combat etc etc.

I did not tell you previous stories because of Eduan’s
Rakoonbaam traveling stage together. It has been a long time.
You can probably see this complete trio for a while.
The upcoming Big Breeder and stuff.. Some kind of confrontation
From Yu Hansung and Bamsung’s side.. might be forming as well.


In any case, with data of Koon Eduan’s debut..
Hoping for you to enjoy the Hidden Floor’s episodes and the road to the main story
I will end this postscript here. I guess I have to push myself harder.


So have a good week
Let’s see you next week

Retrieved from "https://towerofgod.fandom.com/wiki/Vol.2_Ch.278:_%3F%3FF_-_Hell_Train:_Khun_Edahn_(1)?oldid=111350"
Community content is available under CC-BY-SA unless otherwise noted.