??F - Hell Train: The Hidden Hidden Floor (3): Rachel hides her identity from Twenty-Fifth Baam in order to keep the advantage over him. Baam is suspicious of her, but thanks her for her help before leaving with scroll he got from completing the grand quest.

Data Han Sung apologises to Batis for not being able to save the people in the quarantine area, but Batis says it does not matter as everyone will come back to life anyway. They all gather and scans the scroll to get to the next level, but Rachel has not found a good way to join their team. They leave and get a choice of Sweet Castle and Cold Land, but Data Han Sung says he knows the shortest way to family head. The family head being Khun Eduan. 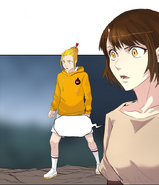 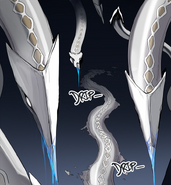 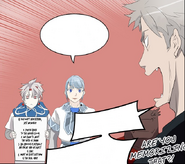 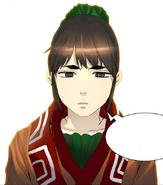 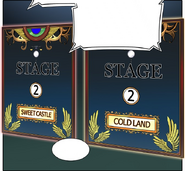 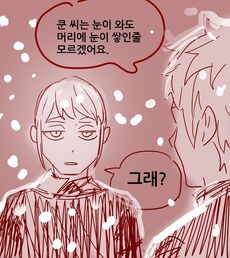 Since it snows, I drew a simple drawing for this episodeSort of a light-hearted panel..


Koon family has either very bluish or whitish hair that is close to the sky color.
Sometimes there is white hair, but it is said that you can tell the difference from Arie family,
because their white hair tends to be very shiny.

So let’s talk about this episode first…
It featured Baam’s story who met Rachel’s clone
And showed him leaving the village after resolving the problem.

Actually, I initially drew the Grand Quest’s rats too cute,
So I had to revise a little by little..
For Yu Hansung’s case, it feels a lot different from when we saw Yu Hansung in the Floor of Test
I wanted to make him bright, yet.


Somehow Androssi’s nemesis joined the team
Well, certainly he is strong, but as a data, the system might have a limit to generate the replica.

This village is finished here, and probably after this,
it will cross and cross to the main episode of this episode
There are probably couple stories along the way, and the quest will be continued as well I think.

Whom had left among the 10 house heads till the last has been revealed
Haha.. It is Mr. ___.. Stories after this
Might as well act as a skirmish for the main story of the house head who will appear later
Of course, the goal of this episode is still Jahad’s data, so let’s have an anticipation about that, too.

I feel many things had happened during the week after the last upload
The entrance exam that was postponed for a week is finally done, it snowed for the first time this year,
and I finally switched my night and day back to normal haha.
I wish everything keeps better and happier.
So please take care of your health during the winter, that has been getting colder,
and be careful not to slip on an icy road.
And be together with puzzled Koon next week haha

Retrieved from "https://towerofgod.fandom.com/wiki/Vol.2_Ch.277:_%3F%3FF_-_Hell_Train:_The_Hidden_Hidden_Floor_(3)?oldid=148326"
Community content is available under CC-BY-SA unless otherwise noted.