??F - Hell Train: The Hidden Hidden Floor (2): Rachel wants to enter the hidden floor while Chung tries to stop her. She puts on the VR device and Chung get aggresive, but the Treasure Eating Stingray protects her from him.

When she enters the hidden floor she gets to choose her avatar, being able change both her name and appearance. She transmits herself to the hidden floor in the middle of the hidden grand quest. The grand quest was activated by Twenty-Fifth Baam and consists of killing several large rats. Rachel kills the last rat and is confronted by Baam. The avatar she chose is revealed to be a lot prettier than she actually is. 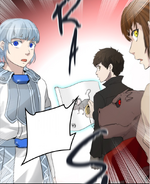 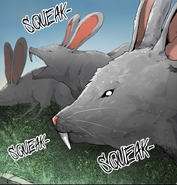 Hi,This is the recently shortened(?) postscript for ep 276.


I actually had been feeling bad and also my grandmother said she is sick,
so I am currently near my hometown.

Until this week, there was some stuff happening to my work process
and people around me, so I was having a rough time.

But from now on, I want to take a deep breath of fresh air,
straighten my body and mind, wrap up the comic book,

And if I have more time, I might as well start doing requests and events.
So I hope you can wait.. a bit longer ^^

(People worry so much because I had been saying I am sick repeatedly,
but I am much better now. I feel quite healthy)

About Rachel's avatar, in fact,
I had been thinking about what it would be like if I changed Rachel's appearance?
So I thought, 'this would be a good chance do it.'
That was kind of my intention.
Rachel is someone who has a complex about own appearance..
she's that type of character anyway.
Well, it looks like Rachel's avatar has quite an idealized look.

I had made a quite complicated setting for the hidden quest and how to use the gauge,
But if the story goes through a complicated 'procedure' it will be too much of burden,
so you can think that I simplified the initial settings a lot and put that version into the script.

From now on, I am trying to figure out how to make it more direct,
And I guess it will get to the main plot with these simplified steps.
As the difficulty level of the quests rises, I think there will be more interesting stuff.
For now, look forward to what Rachel's avatar will do when she first encounters with Baam,
And how it will become the wild card for the future plot.

The weather had become quite cold recently, please be careful not to catch a cold.
I heard there had been a lot of damages to Pohang because of the earthquake.
I hope nobody is affected by it and please take care of yourselves.


And Those of you who are preparing for the 1 week delayed college entrance exam, have a good luck ^^
(Good luck for those who are taking the upcoming teacher employment exam as well)

As always, please be happy and healthy this week
I will see you next week

Retrieved from "https://towerofgod.fandom.com/wiki/Vol.2_Ch.276:_%3F%3FF_-_Hell_Train:_The_Hidden_Hidden_Floor_(2)?oldid=126997"
Community content is available under CC-BY-SA unless otherwise noted.