??F - Hell Train: The Hidden Floor (11): Twenty-Fifth Baam, Androssi Zahard, and Batis continue to fight Chung, putting their hopes in Batis' special bullets to take their foe down. However, the bullets was just another way Chung used to mess with them. Chung then grabs Rose and asks her to commit suicide, which she dutifully does by protecting Chung from Batis' bullets. Meanwhile, Rachel gets annoyed by Chung not answering her, ripping off his VR device to get his attention. 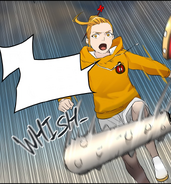 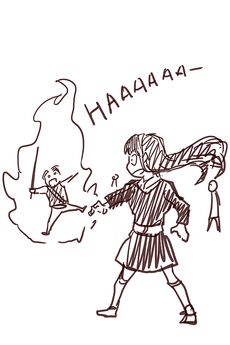 No request this week either because I'm not feeling well.

A lot of you were wondering about Ehwa,
and I can tell you that she's still climbing the Tower tirelessly.
Her flame control's off because Baam's not by her side,
according to the charred note from her ^^;

I'll start requests again when I get better.

This chapter...
A sorta not really twist...
we have Big Breeder's real body.
He looks slightly differet heh.
Why so will be revealed next week... probably. ^^;
I was wondering if I wanted to make the figth scene go longer or
if to just use it as a step towards the last scene,
and I guess I chose the latter.
The reason why Baam's Divine Whirpool was blocked,
and why the Big Breeder meddles with the quest will now be revealed step by step.

I did want to start off the Hidden Floor by completely overturning what's established in its first arc,
and in middle of that twist lies Big Breeder, so I hope that this Big Breeder is able,
as a separate body from the data clones of Family Head or Zahard act as Baam's opponent.

I said last week I wasn't feeling well...
and due to the time constraints I didn't get examined this week either,
so I decided to take it next week.
The medication did help a lot, so it's probably not a big problem ^^;
But I've been getting sick often lately,
so I'll have to be careful.

Since I had a lot on my mind recently,
I was working on it by relying on my physical stamina,
but I've realized that stress really does terrible things to your body.
Everything stems from the heart they say...
Even if there's bad in life you have to think good as you go about your daily life.

Well, everyone take care, watch out for the cold,
and I'll come back next week assuming no serious incidents.
Thank you, and have a good week!
[1]

Retrieved from "https://towerofgod.fandom.com/wiki/Vol.2_Ch.274:_%3F%3FF_-_Hell_Train:_The_Hidden_Floor_(11)?oldid=115267"
Community content is available under CC-BY-SA unless otherwise noted.