??F - Hell Train: The Hidden Floor (10): The Sworn Enemy slaughters all the soldiers in the Quarantine Area and escapes.

Baam gets reunited with Rak after thinking he was dead and explains his situation. Hansung asks Baam to go through the door that is behind the Big Breeder, since he's the only one capable of opening it.

Big Breeder releases the hidden champion. Once Baam gets the chance, he uses the Shinwonryu to open the door, but the Big Breeder sees him and blocks the attack, making Baam's attacks fruitless. 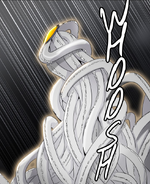 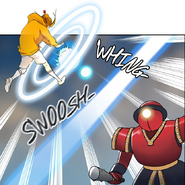 SIU:- The mustache is surprisingly strong 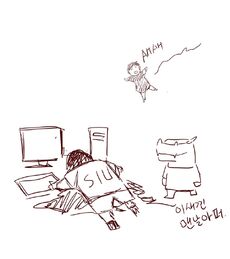 This week's request I'm skipping because I'm not feeling well.
Sorry! I'm taking medication, but it isn't helping.
I even cut coffee because it hurt when I had it.
I thought I had intestinal inflammation,
but I have different symptoms that the hospital recommended examination,
but since I had to make the deadline I decided to defer decision while I had medication.
I want to get better soon.
But once I get better, I will do the request from last week,
as well as one other character in a halloween setting.
Please reply to me a female character and their companion in the comments,
and I'll take the request from there.

So I'll try to keep this short.
This Nemesis, too many people were calling spoilers so I erased a lot of the explanation.
But I'm pretty sure everyone knows hehe. Seems to know Andorssi ^^;
And on the fight between Big Breeder and Team Baam seems to be...
how should I say this... messed up? The quest, the monster that hatched from that egg...
This seems to favour whatever Big Breeder wants.
Maybe something connected to his ability to stop the Divine Whirlpool.

Actually, I added two cuts here from the Preview release, in order to better explain the combat.
I think having it in looks better.
Well, the true nature of this power that stopped Baam's Divine Whirpool,
and how much the Big Breeder will tilt the board...
will Baam survive? Will the Author survive? Please... cheer me on hehe.

Now that the end of the year is approaching,
important tests or events are coming up,
so I hope everyone is prepared for that.
Nowadays at the local cafe everyone is studying hard.
I hope you guys look forward to next week.
Stay healthy, and I hope to recover from adversity with Baam!

Retrieved from "https://towerofgod.fandom.com/wiki/Vol.2_Ch.273:_%3F%3FF_-_Hell_Train:_The_Hidden_Floor_(10)?oldid=126994"
Community content is available under CC-BY-SA unless otherwise noted.