??F - Hell Train: The Hidden Floor (9): The Big Breeder receives information that the prisoners escaped the Quarantine Area, after wondering how, he decides to awaken the Giant. Baam join forces with Hansung in order to defeat this Giant.

The Big Breeder plans to eliminate Khun and the rest of the team by putting a stronger champion inside the eggs of the Long-Tiled Tit.

Baam, Hansung and Androssi arrive at the same place Khun and the rest are fighting. A new Sworn Enemy appears, claiming to be the one that selects the talents that will inherit Zahard's blood. 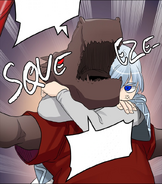 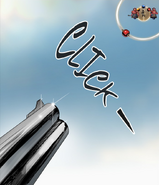 SIU:- I love to fly in the night 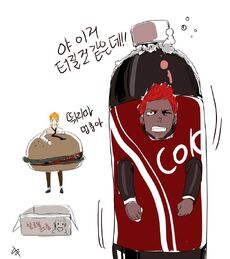 This week's request is from wboocatoon, which is Quint in a cola costume for Halloween.
I would have never thought of it so I picked it,
and I'm not sure how to feel about this ^^;
And since he looked lonely I draw 'Ro here as well.
I have a few characters I love to mess with, and Quint's one of those characters (...)
He helped tarnish the reputation of Rankers early on... I actually chose this specifically to mess with Quint.
I'll take a female character request next week.----

This week, the demonic statue finally moved after a long anticipation.
Although it died anticlimactically keke. For a speedy narrative,
we now have Baam and Yu Han Sung working with each other surprisingly well.
Since this world is based on data, any lore revealed can be modified at any moment.
Such as size, characters, statues... As Yu Han Sung said,
as this is a world of data, you can't take anything at its face value.
Well, Big Breeder seems to be able to meddle with the world to some extant it seems.
How so remains to be seen.

If you classify Shinsoo Control style between power and technique,
Yu Han Sung's style is focused on highly skilled techniques.
Although wave controllers who are born into a lot of power don't particularly need to learn them,
but Yu Han Sung the teacher is quite capable,
despite Baam's disdain for him.

Making Baam fly in when he approaches an enemy seems to become a signature thing these days,
so I decided that instead of jumping in,
I made him fly in via explosion.
Well, Big Breeder and Baam finally meet. Took a few weeks hehe.

And the last Nemesis... whose nemesis is he...?
I think you guys have an idea already, but please do stay curious about him ^^

Well, thank you for reading this week, and next week we'll see the fight with Big Breeder,
who seems to get on everyone's nerves for some reason hehe.
Stay healthy in the cooling weather.
I already got a cold so == (TN: is basically =_=)
I'm taking meds regularly... I never get off of the seasonal cold train,
huh? Well, I'll see you guys next week.
Thank you!

Retrieved from "https://towerofgod.fandom.com/wiki/Vol.2_Ch.272:_%3F%3FF_-_Hell_Train:_The_Hidden_Floor_(9)?oldid=126991"
Community content is available under CC-BY-SA unless otherwise noted.