??F - Hell Train: The Hidden Floor (7): Chapter starts with Yu Hansung telling Androssi to get Baam and leave because he has planted explosives all around The Seed.

Once they escaped, Yu Hansung explains to Baam that the Big Breeders are the henchmens of Zahard, so if he wants to meet Zahard, he will have to go through the Big Breeders. 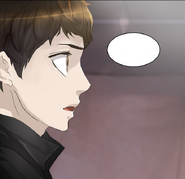 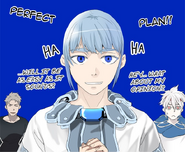 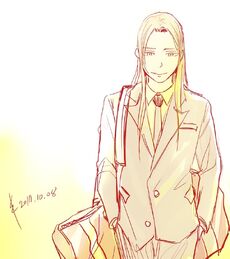 This week's request is a combination from the users game god-nim and maka-nim.

Hansung with his hair down in a school uniform and smiling.
He looks taller than he is supposed to be,
but just gonna say it's just his head is smaller,
hush hush... The bag looks too small for his size,
but going to say he's just strong, hush hush...
His smile looks like he's mocking someone but saying his face is just like it...
Well, there you have it.
I got too lazy to change it keke and I did fulfill Hansung's wish of being taller so keke.
I'm still taking requests, although I do take breaks depending on my condition ^^;

I wonder if you all had a good Chuseok break.
I didn't have a holiday but spent a normal week,
but this unusually long holiday definitely was a time to recharge for everyone,
I felt indirectly. The thing is that I haven't been charged myself,
but... at least in the heart I am.
Regardless! There's still a day of Chuseok holidays.
I hope you guys had a healthy and good holiday.
You know I'm happy when you are haha.

This week we have the Big Breeder.
Actually, he's a bit of a thread in the arc,
or holds the a key element,
so I wasn't sure how to portray him...
but I decided to give him a mustache that I've been pushing hehe.
I don't know why I do it but it's fun to draw them.
My first thought was an evil version of Doctor Strange...
A classical and quintiessential mage of evil.
Since I'm bringing in a lot from the classic stuff,
I thought this kinda stuff would fit right in,
so it just came through with little changes.
I had thought that he didn't have to look all that great...
at least in my mind hehe. But like Hell Joe,
he is a crack upon this world.
Since the Hidden Floor Arc has similar themes with the Floor of Death,
a lot of the lore and the central themes will be similar.

On why the quest ended so suddenly,
quickly, we'll get more on that later,
but I wasn't planning on making a lot of quests for the Bard Village in the first place...
Next few stages won't make the quests important either.
Although concepts such as "stages" or "quests" make it sound so big,
but there's a reason for all of this,
so you should stick along with me for a bit.
What I can say is this: although the lore is limitless,
the story is not. But drawing octopus is fun hehe.
I think I may get addicted.

And the Containment Area, although fun to draw is very difficult hehe.
This is something my assistants are working hard for...
I'm kinda dissapointed it went by quickly,
but I do want to draw spaces like this later in more depth.
Closed spaces with many traps...
there's a charm to it.
Of course, whenever we draw it we always have trouble...

Next week will be Baam escaping his containment area,
and Koon meeting the Big Breeder to complete the Grand Quest in a race against time...
or something like that. So please.
Be on the look out for next week hehe.

I hope you had a good week,
and the long holiday I hope you have a safe trip home.
Thank you for checking on me.
I'll see you next week.

Retrieved from "https://towerofgod.fandom.com/wiki/Vol.2_Ch.270:_%3F%3FF_-_Hell_Train:_The_Hidden_Floor_(7)?oldid=126989"
Community content is available under CC-BY-SA unless otherwise noted.