The Hell Train: The Hidden Floor

??F - Hell Train: The Hidden Floor (6): Yu Hansung and Batis tell Baam about their numerous attempts to leave, dying more than enough times, and that they finally found an exit to the Fruit of Good and Evil. Yu Hansung believes that Baam is the person capable of opening the door to escape the Quarantine Area.

Khun hurries to clear the stage and tries to do the C-Rank quest, the quest with higher difficulty, in order to summon the Big Breeder faster. The Big Breeder notices this and increases the test's difficulty. Khun's lighthouse breaks.

Baam decides to take the shortcut to the exit since he knows Khun and his companions will clear the stage quickly. Just before they leave, Baam's Sworn Enemy wakes up and attacks them. At the same time, the Big Soldier appears, Baam defeats his Sworn Enemy quickly before it can hurt any other person. 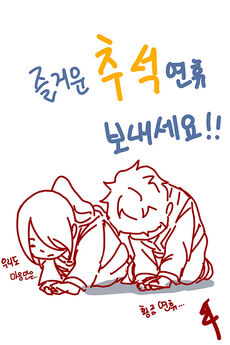 This is the afterwords for Season 2 Chapter 269.

Although it's Chuseok I didn't draw anything big, but with all my heart, have a little holiday doodle...
Hehehe. I'll take requests again starting next week.

Everyone these days, with the substitute holidays and such,
people are saying how it's the golden holidays,
they're going out of the country for the holidays and such...
And I'm like "am I even in the right place" kinda huhu...
It's too late now keke. I'll be working hard this week as well.

This week... Baam threw down with Viole...
Can't have a Chuseok without Ssireum (..right?) Anyway,
Khun's team has more bright feeling quests while those on the inside are having darker-feeling battles.
It's as intended, and I like both. Since this is a world made of data,
it has features different from the main Tower of God universe,
so I can be more creative with the stuff I can do.

In regards to Viole, since Baam's data was only taken on the surface,
some of Baam's innate powers are not replicated.
There are some limitations to what the data can replicate from Original Baam in other words.

Yu Han Sung as a Regular is less like Baam,
and more like a classical Wave Controller that supports by altering the flow from the behind,
or countering incoming enemies. Baam is more of a melee focused Wave Controller.

The octopus for this chapter...
Since I haven't been able to draw a lot of monsters as characters in Tower of God recently,
I decided this arc will have a bit more. Even if it may seem a bit out of place,
I hope you enjoy it ^^

Well, next week will be a continuation of the quests,
and lots of battles taking place.
What kind of a jerk Big Breeder is...
you'll fine out next week.

Well, everyone have a happy Chuseok,
and I'll spend a happy week at home in spirit.
Stay healthy as the weather turns cold!
Thank you ^^