??F - Hell Train: The Hidden Floor (3): After Yu Hansung's explanation about how the Sworn Enemies work, Baam's enemy appears and it looks like it's himself.

Mi-eum explains Khun about the Quarantine area and the stages of the Hidden Floor.

Baam's sworn enemy engages into a fight against Baam, after exchanging some hits, Yu Hansung steps in and activates one of the traps, but Baam saves his Sworn Enemy's life. Baam says to Yu Hansung that he can't watch him attack his sworn enemy like that, and decides to deal with him by himself. 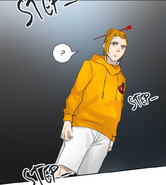 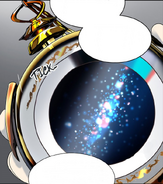 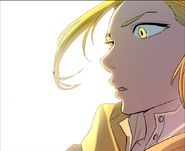 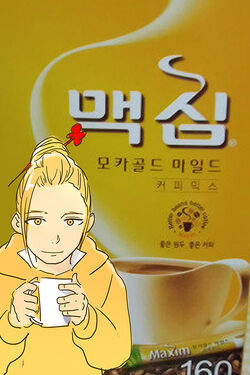 This week's request is from 사각사각-nim,
which is Yu Han Sung as the cover model for Maxim (TN: Instant coffee that Yu Han Sung Likes so much)
I thought this would be fun so I tried it, but due to lack of time and poor capture quality,
so... ^^; Not what I thought... The photo I just used something from the internets.
I'm not selling this picture, so there should be no problems haha.
My requests are still open ^^

Sometimes I want to do a collaboration thing with a food brand or with a clothing line...
I think it'll be difficult to get my foot in the door but I think if the opportunity strikes right it could be fun hehe.

Anyway this week...
I think I spoiled this week's contents last week... I think.
But we have the exposition on the Stage(s) (TN: Plural markers are optional in Korean ;n;),
and the Forbidden Fruit. This is just lore for this particular stage,
but I tried to go for maximum polish in a short time.

In webtoons or in manhwas(K for Manga) that deal with fantasy,
they succumb to sacrificing their unique color due to the volume of the work often.
If you try to worldbuild, you have to put in more content and that means a slower pace of work,
so you end up getting yelled at despite the hard work, ㅜㅜ.
I've been doing this for a few years now... ^^;
Well, I just want to give you guys immersion into this other world.
I don't want the pacing to get too loose either...
I have to to blend the two ends well, but that's a difficult problem.
But it'll get better, I think.

The Stage will have parts that go quickly, as well as parts that go on long.
I don't know how many stages will be in the arc, but it will be longer than other arcs.
However, each stage isn't going to be too long, so the pace won't be slow.
Of course, pace is a subjective thing, so it's difficult to say in advance haha.

Moreover... Baam meets his nemesis...
Since this arc's theme is "meeting of the past and the present"
I think Baam fighting himself has something to do with that I'd imagine.

I recently noticed myself getting heavier, so I'm dieting for my health...
But it's really hard. Battle with yourself is always lonesome and bleak
(tn: SIU used two diff words in Korean that both translate to "lonely", but has different connotations)
I lose to food on a daily basis. Since I work I'm only eating two meals a day...
but that's all turning into fat -_-...
I lose, but Baam's still in the fighting so haha.
I hope you guys look forward to how Baam and Viole's fight will progress.

Well, all of you have a happy week this week too. And see you in the next one!

Retrieved from "https://towerofgod.fandom.com/wiki/Vol.2_Ch.266:_%3F%3FF_-_Hell_Train:_The_Hidden_Floor_(3)?oldid=126985"
Community content is available under CC-BY-SA unless otherwise noted.