??F - Hell Train: The Hidden Floor (2): Baam and Androssi wake up, just to be welcomed by Yu Hansung. After getting surprised by this, Hansung explains that he doesn't know them, given that he's the Regular data of his outside self, but regardless, he explains that he's been waiting for Baam for a long time.

Rak tries to explain to Khun how he got to the Hidden Floor but all he remembers is being hit by Yuri's attack and waking up at the Hidden Floor. Mi-eum explains Khun how the Floor works and leads them to the city, Khun hopes to met the rest of the team there.

Baam and Androssi decide to follow Hansung while he explains them how the Sworn Enemy system works. 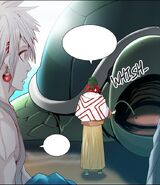 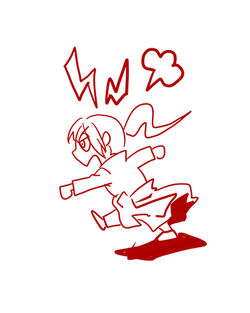 Since I wasn't feeling too good, here's a simple Viole instead of a request.
I'll be taking requests till next week for drawing.

Since the weather's been chaotic, I haven't been able to keep myself well regulated,
so my thoughts almost drifted away to another world before the deadline...
a few times... ; I'm doing doing physically too well these days and I had a big workload this week,
but I did get it done so that's a relief. Thank you assistants for helping out!
I'm always getting help from many. This week, I'll try to rest more during the times I try to save.

This week... we're having more exposition about the floor's setting.
For a while it's going to be a Baam and Koon focused narrative. There's a lot to explain,
and I also need to progress the plot. There's multiple stories ready to go in the Floor of Death.
To divide it into stages it's like a game I guess.

This particular arc... It's based on a popular trope of "living inside a video game"
found in many LN and manhwa that swept across Korea and also recently across the sea (TR: Japan).
However, I'm focusing less on game-like aspects but more on the virtual REALITY.
So the characters from this arc are less game characters but more of a virtual organism,
a human composed of data... that's the idea at least. So I'm skipping the usually used concepts such as items,
skills, status effects and the like for this arc for added realism.
If you are asking me what game this arc is based on...
You may find points of homage to classics "Hero Legend Series" or "Ustonicia Story"
(TN: I have no idea what these are.) They're my first RPG games so I guess
I got influenced by them I would think (except for their recent releases).
The influence only points towards my understanding of the genre,
not necessarily their plot points or specific lore.
Although I said this is loosly based on the "video game is reality" genre,
the plot and theme will be much more Cyberpunk in nature.
In addition, there will be a few stories about some characters' pasts or the Ten Families or the Tower itself.
I also think this Nemesis system, while serving a narrative role of "balancing this world",
can also tell a great number of stories. With Viole as a Nemesis confirmed,
I hope you look forward to other characters and their Nemesis. ^^

Well, I hope you enjoyed this week's chapter, and I'll come back next week.
Stay happy, stay healthy, and have a good week.
Thank you !!
[1]

Retrieved from "https://towerofgod.fandom.com/wiki/Vol.2_Ch.265:_%3F%3FF_-_Hell_Train:_The_Hidden_Floor_(2)?oldid=126984"
Community content is available under CC-BY-SA unless otherwise noted.