43F - Hell Train: New Power (3): Twenty-Fifth Baam, after leaving Rachel's room, encounters David Hockney, after a small talk about the paiting and the thorn, Hockney mentions that he has a bad feeling, and the closer he gets to the room, the more he feels like someone is about to die.

Outside of the train, Hwa Ryun has a talk with the Elders about the events that went down on the Floor of Death. Hwa Ryun asks to stablish a line of conversation with Madoraco in order to make a deal. Evan meets Hwa Ryun and asks if she knows what's in the Hidden Floor, to what Hwa Ryun responds "The 'evil' sleeping that Zahard left after becoming a God'.

The rest of the team joins Baam on his quest to the Hidden Floor. After passing the last test, the team reach the entrance to the Room of the Past. Karaka appears in possession of Yeo Miseng, Ja Wangnan and Ha Yura. Wangnan notices the Ring on Karaka's fingers and gets his attention. 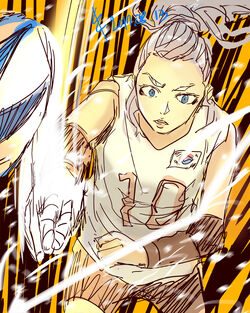 Hello everyone!
Once again in this tireless series is Tower of God Season 2 Chapter 262 Afterwords! ^^

This week's request, featuring a special request via SNS from someone abroad named Zumisumi is "Garam Zahard playing volleyball".
This is the first time I've drawn a request from a reader abroad hehe.
I drew with the volleyball player Kim Yeon-gyeong as the base,
and I think she resembles Garam somewhat...
Looks like in volleyball world,
it's world-class events right now.
I hope everyone puts in effort and get good results!
I take requests weekly, so if you have a request, please reply with them below ^^
[TN: Non-Korean residents can send requests to SIU's Twitter.]
I pick one every week and draw them.

This week is.. a continuation of the "calm before the storm",
while interrupted with battles within the Train.
Rachel's new power will have a lot of uses in the Hidden Floor,
so if you just wait a bit longer, you'll see what the power truly signifies ^^ I hope.
Baam, Rachel, and the Regulars of the team: their growth is going incredibly slowly,
but like other manhwa the main characters grow a tad faster and a tad more specially.
That's a trope I'm using. Of course,
I want to keep things balanced.

The battle progressing on the train, I haven't drawn actual battles in the train that often, haven't I?
I guess I'll always feel like I could have done better when it comes to expressing the world built.
Like the battle with Hoaqin, or this search of the hidden room...
Thanks to these bold stories important to the narrative, I miss out on being able to talk more about the train itself...
this is the biggest wall and difficulty in the fantasy genre.
And in order to alleviate that feeling, to alleviate the sense of falling short,
I decided to put in bits and bits of combat in the Train.

This genre called fantasy... when it comes to building a world and drawing it out,
it's got a unique charm compared to modern-day genres,
where you can use photos as reference...
It's artisan in a sense... hehe I hope you guys enjoy those aspects a bit more.
I always feel a tad short, but developing through doing various different experiments is a good thing, I believe.

And the scene where Wangnan sees Karaka's ring...
I wondered whether putting it here was a good idea.
Reason being that this is a very important but a very drawn out theme...
It's a narrative clue I've dragged out, thinking I'll talk about it one day.
There's both correct and incorrect aspects to what many of you are predicting, but regardless, the possibility is that Wangnan's climb in the Tower will be a big axis of the story.
Whether Wangnan will go to the Hidden floor, that's also a possibility hehe.
The story of the Ring, along with the story of the Thirteen Months will be a story that I'll be drawing out for a long, long time ^^;
I hope you're excited for it.

Well, thank you for coming to my blog this week too.
I hope you have a happy week, have fun, stay healthy,
and I'll see you next with with Zahard's ring ^^

Retrieved from "https://towerofgod.fandom.com/wiki/Vol.2_Ch.262:_43F_-_Hell_Train:_New_Power_(3)?oldid=140887"
Community content is available under CC-BY-SA unless otherwise noted.