43F - Hell Train: New Power (2): Koon informs his allies of their forthcoming trip to a 'secret' place, telling them if they wanted to come to meet them at the given time; Hwa Ryun notes she wasn't coming while Androssi wondered why Baam had gone to see Rachel. Meanwhile, Baam tells Rachel that she would go to the Hidden Floor and whoever found "it" first would own the second Thorn. Rachel asks why he was being so courteous and Baam replies that it was because they were enemies, so their competition should be fair. Leaving, Baam wonderingly notices his cheek was bleeding before bumping into an irate Androssi. Confronting him about how he was treating Rachel, Androssi tells Baam that he would need her permission to allow Rachel to join their team.

Entering Rachel's room, Androssi confronts Rachel about her relationship with Baam with the latter mentioning that she envies the former, adding that Androssi's traits always keep her in people's good books regardless of what she does. Hearing this, Androssi tells Rachel to come outside so she could fix her warped personality. Taking her to a locked room, Androssi says she will test Rachel to see if she was worthy to come with them to the Hidden Floor. Complaining about the unfairness of the situation, Androssi quickly overwhelms Rachel while chastising her. Androssi then notices something weird.

Elsewhere, Hockney encounters Baam and tells him that he sees "death" lingering around the place. Back in the room, a cautious Androssi attacks Rachel despite seeing nothing and both are left astounded when Androssi's weapon is blocked and broken... 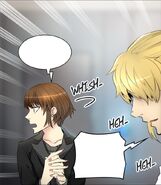 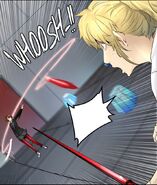 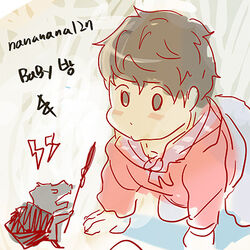 Hello. This request is baby Baam as requested by nananana127-nim.
They requested RaKoonBaam, but I'm limiting it to one character at a time hehe.
Next week I'll draw a character that isn't Baam ^^; Next week will be random as well.

This week... is a continuation of last week in that it establishes the relationships between Rachel,
Baam, and Androssi more. Personally I thought it was something I had to go over,
but it doesn't really fall under any trendy tropes or patterns in the webtoon world ^^;;
I'm not saying if you guys are going to like it right away, but it's the direction I think is correct.
Of course, since I'm doing this for the moment I need to worry about my survival hahaha.
But on what kind of a power Rachel received, and what arises from such, I hope you find it interesting ^^
I think all sorts of things can happen in a long distance event such as this.
And the power given to Rachel is not something to be scoffed at.
I mean, a 10 Family Head, one of the most OP individuals in the Tower, gave it to her.

On the Hidden Floor... since many works delve into virtual worlds it's not an especially novel concept,
but I hope that it will be interesting in the context of the world of Tower of God.
I also hope to deal with content I wanted to get out during the Floor of Death but didn't here.
Regardless, it's an arc I'm preparing diligently for.

In short terms, I hope you are awaiting it with interest! Yeah... hehe.

Hm... as a sidenote, there's a problem arising because more people are reading previews...

I hope that as long as everyone stay within the jurisdiction of the law
and keep what they need to keep, there won't be any extreme or exceptional situations.
As such, when many consider the lawless thing to be the natural order...
I lack abilities to handle those problems as well.
That's a problem that the law and society should punish and manage, not the author.
As such, I hope that we keep rules we have to follow among one other.

Regardless... haha So another week has passed...
I haven't taken a summer vacation yet but I know a lot of you are going.
I hope that all of you have a safe and fun time without incident.
And those of you who've taken their vacations, I hope you work hard.

Well, be happy and see you next week!

Retrieved from "https://towerofgod.fandom.com/wiki/Vol.2_Ch.261:_43F_-_Hell_Train:_New_Power_(2)?oldid=107889"
Community content is available under CC-BY-SA unless otherwise noted.