43F - Hell Train: New Power (1): One hour after leaving the Floor of Death, Urek tells Baam's team that they have met Yeon Yihwa and Danwha, but they had no luck finding Rak. Khun tries to conform Baam by saying that if Yeon and Danwha are alive, then Rak must be too.

Urek asks Baam if he's from the outside of the Tower. After hearing Baam saying that he is, and expaining that he doesn't know anything about the Outside, Urek says to Baam that he should not pay attention to the things he had learnt at the Floor of Death. They say their goodbyes and Urek tells Yuje that they will meet in a higher place and there will be time to talk.

Once inside the train, Karaka explains that he will use Wangnan and Miseng as baits to get Viole.

Baam tells Khun about the Hidden Floor and the Master Key, and that he will find a way to decide whether he or Rachel deserves the thorn more. Baam shows Khun the power that he gained after defeating the Red Thryssa, being able to widen the range he can produce Shinsu in, and being better at reading situations.

Hockney believes that his picture is actually the third piece of the Thorn, and that the Thorn itself is using him to lead Baam to it.

Gustang talks to a mysteryous person, saying that even with Urek involved, the bigger picture hasn't changed. He states that he gave Baam the second thorn, and gave Rachel a gift, calling her this mysteryous person's "pawn". 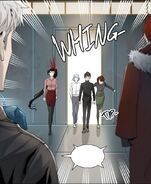 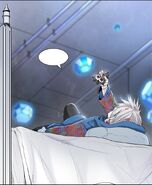 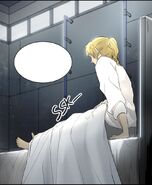 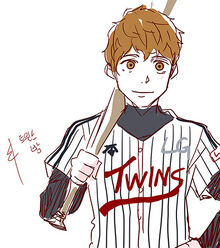 This is the Afterwords for Season 2 Chapter 260.
This week's request is also a team uniform + ToG Character. It's Baam in the LG Twins Uniform,
as requested by hwclvlz1006-nim. They also requested Khun, but I'm only doing individual shots in this series...
I don't watch LG baseball, but they seem like pretty fun guys. Perhaps it's because they're in Seoul ^^;
Next week's request will be anything; it's been a while since we haven't had a themed request.

This chapter... we have a new arc starting.

Last week, the Preview Edition upload just went straight so it was misprinted as there being a break this week ^^;;
There's no break here. Sorry about the confusion. This arc will be a in-between arc to the next one... yes.
Since the previous chapters were pretty intense, we'll be going at a rate that invokes quiet before the storm.
Since Tower of God has multiple long-term plots proceeding simultaneously due to the nature of the story,
I try to go through the arcs as quickly as possible rather than trying to stretch out the arcs.
Of course, I add more content to detail the story as needed...
I struggle a lot, but perspective from there can be divisive as well...
I do pay attention to the matter.

Well, this arc centers on the attitudes and change in relationships
among the Regulars for the first time in a while,
so we'll see a lot of description on the Regulars we haven't had in a while.
After all, the focus of the webtoon is on the Regulars, not the Rankers ^^;
So characters like Androssi or Rachel will have stories you guys will look forward too, hopefully.

Recently (actually always) I thought about how I can do long term uploads in a stable manner.
Uploading brings competition, and since the market is so volatile, long term works tend to become formulaic...
And to experiment and venture out, I'm getting old and the work ages as well....
it's hard ^^; There's a lot I can do, but I worry if I can do it well. I always hope
that I can always be decisive about it as I was at first. Fantasy after all should be...
beckoning a spirit of adventure, in my opinion.

Next week should show us more waves hitting the story.
Since the next arc is also a fairly important and content-rich story,
I hope you guys are excited about this bridge arc as well.

Well, have a good week, stay healthy, and I'll see you next week.