43F - Hell Train: The Floor of Death (28): Po Bidau Gustang asks Twenty-Fifth Baam to get an item for him on the hidden floor. Baam asks Gustang to release the soul on the 43rd Floor, but Gustang tells him that he is forcing his own view of change on people who prefer complacency. Ha Yuri Zahard travels to Garam Zahard with Androssi Zahard, since she wanted to meet the one sister who turned against Zahard. Androssi says she might just turn against zahard herself, then Garam says that at some point she has to decide between Baam and the Zahard Empire.

Gustang confronts Urek Mazino about Hell Joe, comparing Hell Joe to bug that would be crushed under Urek's shoe. Urek says that this attitude is why he does not like the Great Warriors, but he does want to save Hell Joe from the memory erasion that Gustang was about to do. All the regulars says their goodbye to the inhabitants of the floor of death before being sent out by Urek Manzino. Gustang then erases the memories of the floor of death inhabitants, ending the arc of the floor of death. Karaka returns to the Hell Express with Ja Wangnan, Ha Yura, and White in tow. Meanwhile, Rak Wraithraiser awaits the return of his companions. 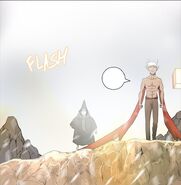 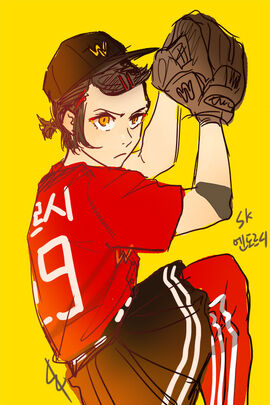 Hello everyone, this is the afterwords for Tower of God Season 2 Chapter 259.

This is Androssi pitching in SK Wyverns unifrom,
as suggested by 최규연-nim (tn: Choe Gyu-Yun).
I posed her from a reference image and... the team name got covered up keke.
Sozzy about that. (tn: intentional misspelling). Personally, I think the old uniforms for the SK team were better,
so I drew her in those. (Since I'm so busy these days I can't watch baseball ㅠㅠ).
I'll take one more week of sports team uniform + characters.

A lot of you ask if I'm tired of writing afterwords for every chapter,
and it is indeed bothersome and tiring to do it every week,
but it feels like I have to do it or else I'll feel empty... or something like that,
I guess. It's like taking responsibility for your chapter every week,
like a business that has the owner's name in the business name hehe.

Hmm... well, the Floor of Death arc has ended. This chapter was basically the wrap up of an arc. ^^.
And setting up anticipation for the next chapter/arc perhaps? I can talk more freely now that the arc is over,
and I can say that Joe's story and the Gran clan's story, all part of the Floor of Death story,
was an arc I wanted to make with the theme of "Spiritual death".

Although all beings in the Floor of death are immortal (tn: lit deathless),
but in exchange for immortality they lack what Urek describes as
"The instinct of all life to head where it is wider, above others". Hockney was a pure individual...
who still had that instinct. For Joe, his once-pure instinct had become corrupted from one incident.
Perhaps Joe's instinct and Hockney's instict may have been different in nature.

I thought that perhaps that we too have the "dead instinct" described here.
I mean, I did name Hell Joe Hell Joe for a reason (tn: Hell Joseon, which is a blanket Korean
meme to point out all social problems in Korea).

I think the reason for the disappearance of human instinct for facing
challenges and adventures is not the fault of an individual but societal and inevitable reasons.
"A society where effort means nothing" or "A society only for the top percent",
or "A society where there is unchecked authoritarian or religion"...
As I know it (for I haven't died yet), a truly dead world/society is one where
a great obstacle or fear killed "instinct and passion".

Well, I said it like it was some big thing, but this is really just a story of the world
from my perspective from my level. I hope you guys take it lightly. It was intentional that neither
Urek nor Baam could save the Floor of Death in this arc,
and Garam wanting the Floor of Death staying as is can put her has a hypocrite,
but I believe that people like Joe and Hockney would come into being in the future.
Of course, if they become corrupted, they might become like Joe,
but instead of an absolute figure cracking the egg,
it should be the society cracking the eggshell from the inside out.
That's what I think at least.

I guess since this is the end of an arc the afterwords got long ^^;;
I always have a lot of thoughts, "thoughts" being the operative word, hehe.
It's vital that I learn to express it better.
But I always try every week to push through and make different and new stories,
so I hope you guys enjoy that.

Well everyone, stay healthy and happy, and see you next week with a new arc! ^^

Retrieved from "https://towerofgod.fandom.com/wiki/Vol.2_Ch.259:_43F_-_Hell_Train:_The_Floor_of_Death_(28)?oldid=126977"
Community content is available under CC-BY-SA unless otherwise noted.