43F - Hell Train: The Floor of Death (21): Urek takes off the anklet and reveals that he has a drug that can separate Hell Joe from Red Thryssa. This drug was discovered by one of the Wolhaiksong members while investigating a conection between FUG and the Workshop, regardless, Urek afirms that he haven't found a reason to why FUG would develop such a drug.

Hell Joe remembers the time when he and Urek Mazino first met, and Urek tells him why he entrusted the Red Thryssa to him. Urek decides to fight Hell Joe with just 10% of his power for the time being, power that surprises both Baam and Hell Joe.

Urek gets close to Hell Joe with the help of Baam and explains to him why he thinks that he got smaller than when he was powerless. This makes Hell Joe go mad and The Red Thryssa appears.

Rachel questions why Grand de Lee would kill her if she's the saviour they were waiting for. Regardless of Rachel's attempts to make him reason with her, he decides to kill Rachel by making the Bee Observer sting her neck. 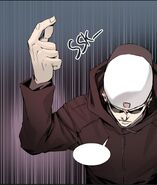 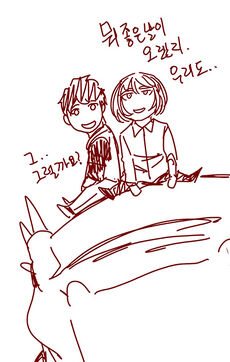 This is the afterwords for Season 2 Chapter 252.
It's hot during the day but cold in the night, meaning its easy to catch a cold. Everyone stay healthy.


I'm at a cafe right now. For someone in my line of work, having a 24 hour cafe in front of my house is a plus in the environment. Whenever I'm gathering my thoughts late night or working without being shut in, and I can't sleep Monday nights either, so I pull all-nighters at the local coffee place.
So... Yeah.

So Rachel's finally woke after a shot.... not quite. Hehe.
Let's see, there was the Hell Joe vs Urek's fight... hmm.. When I wrote up this chapter I thought Urek's lines were a bit too cheesy, but that's Urek's thing. And I thought that if Urek went all out it would have been no fun.
So yeah. Sorry about that.
Talking more about Urek... So in Urek Mazino, Urek's from the Korean word for Rockfish, "Uruk"(Ooreok), and Mazino's from the Maginot Line. Why Rockfish? Well, he's grey, and Rockfish are white-fleshed.... so.... yeah...? I wanted him to be like Eminem and be free-spirited, or that was my hope, but in reality... he's that idiot older brother... Since the Ten Clan Heads are so struck up, serious, and authoritative, I wanted to make Urek, who is on their level of influence, much more free-spirted. He's actually quite smart, he's not the idiot brother that everyone thinks he is...


On the fight scene... I always want to do something unique for each fight scenes when I make them hehe. It may be hard to understand, but I keep wanting to always try new things, so I sometimes add redundant imagery... ^^;; Yeah... gonna have to keep working on that. I worked hard on Urek and Hell Joe's fight scene ^^; Well there goes another week. Have a good week, stay healthy, Hope to see you next time.

Retrieved from "https://towerofgod.fandom.com/wiki/Vol.2_Ch.252:_43F_-_Hell_Train:_The_Floor_of_Death_(21)?oldid=126928"
Community content is available under CC-BY-SA unless otherwise noted.