43F - Hell Train: The Floor of Death (19): The group gets ready to stall Hell Joe but Yuri leaps in to attack anyway, prompting Garam to come to her aid. Garam's subordinate then attacks with an ice blast but Hell Joe brushes it off, with Hockney noting that no attack would work on him. Hell Joe then gets serious and alters the Shinsu concentration, hindering Garam and Yuri, but Baam remains unperturbed by the change. Taking the bait by noticing Baam's Thorn, the group flees in the direction of the foreseen place while Hell Joe tries to chase after them. Dodging Sanchez's attack on their escape, which strikes Joe instead, Hell Joe floods the hole with blood in fury. The group manage to get out of the hole, just in time, to the place Hockney saw in his vision but Hell Joe catches up to them anyway. With nowhere to run, Yuri attempts to attack again but gets blasted away by Sanchez. Hell Joe then says he'll end it with Baam hoping for Garam to hurry.

Meanwhile, Garam wonders aloud what was supposed to be coming to help them. Around the corner, Urek hides sheepishly and frets over being rejected if Garam found out he gave Hell Joe the Red Thryssa. Garam's subordinate reminds her of what Hockney told her earlier and she begins reciting aloud what she had been told she would say. Hearing her words, Urek makes his presence known, shocking Garam.

Hell Joe fires off a large blast of Shinsu with the intent to subdue them, but Urek suddenly appears and deflects the attack with a "love-enhanced" punch. Surprising Hell Joe with his appearance, Urek greets him and mentions he'd changed a lot since the last time they met. 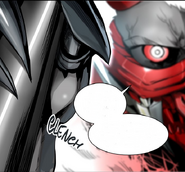 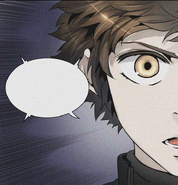 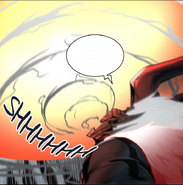 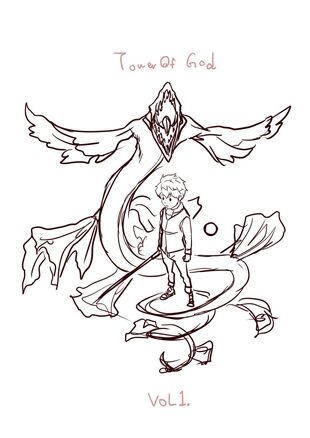 This is the afterwords for Tower of God Season 2 Chapter 250.
Today, here's the back cover for the Tanokbon backcover I didn't get to upload last time.
I think I'll have a chibi character and some extra background every volume.
Vol. 1 will be Baam. Not sure who next...
It's going slow due to circumstances these days,
but I'll get it done over time.

So this chapter was basically:
Blah blah blah Urek's here! ^^;

I am kinda dissapointed about the loss of detail in the middle,
but I tried to get on with it quickly while explaining the situation.
The destination is the same,
but at what tempo it's done splits the demographic, I'd say.

There will be more story on Urek and Garam's relationship in the future,
and there will be another more important event coming up,
so if you're interested in Urek and Garam's relationship, stay tuned.
Rachel and Baam as well...
For main characters, they have their own character arcs that transcend story arcs,
so I'm hoping you guys don't expect too much from a single story arc.

Hockney's Eye (from D'za) doesn't quite see the future,
but it leads Hockney to a certain future.
Getting there is on Hockney and the others,
but it's not the simple pre-cog as it seems to be here.

Well, now that Urek's facing Hell Joe,
You'll hear a lot more on Urek and Hell Joe's past and such ^^;
Urek's high strung and so is Hell Jo,
so it will be rather... impassioned, the dialogue...
But no character can be equal,
and a work's mood can change based on who is the focus,
so I hope you that into consideration, the character's traits.^ ^

The last few years it's been pretty difficult...
Getting scammed, facing failures, having more bad than good happen to me...
Now I feel like I can draw really dark chuuni stuff hehe.
But the work, I want to make more vibrant, more detailed and fun.
Well, like I always say, it's not a matter of how hard you work but whether you're good at it or not... ^^;
I hope I'm doing good.
I want to do good.

Well, I hope you enjoyed this chapter,
have a good week and stay healthy!

Hope to see you in the next one