25F - The Wool's Knot (2): This is the twenty-fourth chapter of Volume 2 of Tower of God. It follows Edin Dan's introduction to the rest of Khun's team and Khun revealing to Ship Leesoo that Rachel tricked them.

Dan is talking with one of the members at Khun's lodging, Novick. The member tells Dan that he is a Spear Bearer and warns him that the team that he's going to introduce to him is composed of dangerous individuals. When they shake hands, Dan realizes the guy is strong. Dan asks him why Khun wishes to climb the Tower and he answers he is trying to get Rachel to the top.

The scene switches to Rachel's room where Khun is talking to Rachel. Rachel still pretends that she can't walk and misses Baam. She says that she saw Baam in her dream and says that she feels Baam is still alive. The rest of the team believes Rachel can't use her legs.

Meanwhile, Novick takes Dan to the place where the rest of the teammates are waiting.

Later in the end, it goes back to Rachel's room where Khun is comforting Rachel. After Khun left Rachel's room, the latter gets up from the bed and complains how Khun came in so suddenly. After getting out of her bed and stretching out, she tells herself that she is excited that the team is finally complete and will soon climb the Tower. She shows her anticipation to see her Star-nim. Little did she know, Khun kept a Lighthouse in her room and witnessed all that. He gets a call from Leesoo and tells him that he has finished collecting members and will soon move on and hopefully sees each other again quickly. When Leesoo asks how Rachel is doing. Khun tells him that she is fine and added that he is positively sure, by secretly monitoring Rachel's room from one of his lighthouses, that Rachel had tricked them all this time. 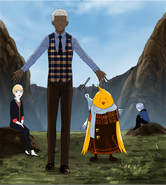 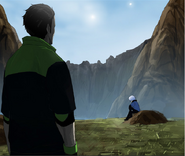 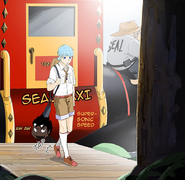 The lame one is a swindler.

I'm not sure either.
I thought this chapter was Love and War.

Many people think the current time is 5 years after the end of Part 1 because of the prologue,
but it's actually 6 years later.

Also, 6 years is not a long time in the Tower.
To us it's about 1-2 years?
There are fewer days in the year and people live longer, so time feels different.
As people become Rankers, the difference in their perception of time gets even bigger.

There is a post about time
(I think I posted it about a year ago;),
but there's a slight spoiler in it so it isn't revealed.
Only I can see it.
I'll reveal it later.

The Khun arc and the next arc actually have more reveals about Part 1 than battle scenes.
I guess that's good news for people who like story reveals.

I already told you that once the next two arcs are done there'll be one big arc.
Haha, I think the stuff you've been expecting are all mostly there.