43F - Hell Train: The Floor of Death (17): On their route to De Sah, Baam kills their assailants with his newest technique while Rachel becomes suspicious of De Lee's motivations. Meanwhile, Koon has the same suspicions about Hwa Ryun.

Outside, Garam gets ready to rid Yuri of her possessor with her special items but is interrupted by Hell Joe still wanting to bargain with the possessed Yuri. Just then Baam, Mata and Hockney arrive, infuriating Hell Joe further. Elsewhere Urek Mazino rushes to Joe's fortress. 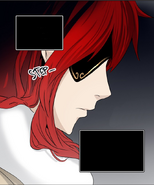 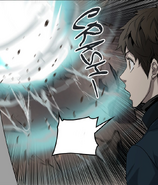 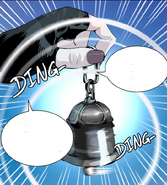 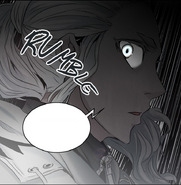 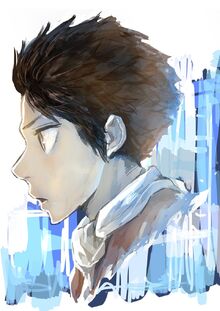 This is my proposal for the Tankobon cover, which will be coming out... eventually.
This is just a proposal, so I'll probably redraw that again some time. ^^.
The background continues to the back cover, which will be uploaded next week.
Actually, I contemplated whether I should continue with the tankobon work.
I ultimately thought that if I could work at it slowly when I have time, I can start releasing books one by one.
But it can get delayed if it proves to be much.

First, Baam and Yuri's reunification?
I had that scene planned out first, and I had to think how that would happen, working backwards.
In this match of sorts, Baam's a incredibly small being, so I had to think how Baam would approach her, would it even be natural for Baam to wake Yuri up again...
I leave it up to you guys to decide how it was, but it was not an easy decision ^^;;
When an author is contemplative, it has both pros and cons.

On Hell Joe's identity, there was a question whether to reveal it up ahead, or to reveal it later.
If I had revealed it first, I would have frontloaded Hell Joe's importance early,
so I decided to make him seem like a gag character and making the big reveal later.

Some of you may have noticed, but this fight is basically the Enryu vs Administrator fight scaled down.
Hell Joe, the owner of an Administrator cub vs Irregulars Baam and Urek.
You can probably see it turning out the same way.
Note that Hell Joe's Red Bari is not really a cub per se, but more of a part of the Administrator that died.
Still incredibly powerful.

Well, sun is shining, air pollution's getting worse, perfect weather for reading webtoons.
I'll be off, hope you enjoyed this week's chapter.
Stay healthy, stay happy, see you next week. Thank you!

Retrieved from "https://towerofgod.fandom.com/wiki/Vol.2_Ch.248:_43F_-_Hell_Train:_The_Floor_of_Death_(17)?oldid=126924"
Community content is available under CC-BY-SA unless otherwise noted.