43F - Hell Train: The Floor of Death (16): Hell Joe tries to bargain with the possessed Yuri Zahard until the unexpected arrival of Garam Zahard puts a break on things. Elsewhere having survived Urek's attack, Karaka decides to escape explosively and afterwards Urek then informs the remaining Regulars of his reason for being there.

Back at the fortress, Grand De Lee and the others arrive and immediately encounter Fabregas however Baam deals with him permanently. 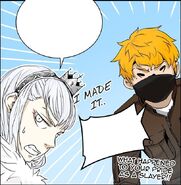 This week, my wrist's condition worsened due to overload, so I decided not to draw anything I didn't need to.
I feel little nerve shocks and it's irritated, so it bothers me a fair bit. I'll finish the cherry blossom festival requests some other time. Sorry to keep you guys waiting ㅠㅠ.

Next week, instead of the request I'll be drawing some sketches or background for the cover of tanokbon Volume 1. A lot of you want tanokbon, so I'll press on with it even if it's hard ^^ I've been getting some pressure from others because it's been pretty delayed... Ah, I've become slave to my own art...

It will come out before the second half of the year... ideally. I don't know what to add in the extras. Some 4-cut gag manhwas... additional lore... I have lots of ideas, but you guys should tell me what you guys want in the comments ^^. (Of course, nothing too complex, masters)

In words, "Baam's in the house!" is the idea, hehe. Baam can kill "immortal" beings we established. On Yuri's side, we already have Garam, and Urek seems to be headed that way too, Since all these stories around are gathering into one in this arc, I hope you guys enjoy the convergence.

This arc is actually out of the balance. Compared to both previous arcs and coming up episodes there's a lot of strong characters and the scope is much bigger. The structure of the power scale of here isn't exactly Dragonball, so I don't worry about power inflation, but if the scale gets too big the smaller, more intricate parts of the story become harder to depict. That's somthing Khun and Baam will be handling,
so be on the lookout for their side.

Hell Jo has his reasons the way he behaves, so I'm trying to be detailed in his depiction. So the end of the story will have more flow centered around the story. Well, for a while it will be fighting and smashing ^^
Hell Joe's true identity... you'll see hehe.

These days when I'm alone I feel depressed, so I take a lot of time for walks in a park or working outside. The weather's nice and it's a good change of pace, but Seoul's pollution problem... it's pretty intense;;; (t/n: Don't visit Korea in the spring, winds from China bring over micro-dust that just clogs your systems. Not too bad in the rural area, but Seoul is hit the worst by it.) I am thinking about going back out to the countryside for my health haha. Prices in Seoul are too expensive too... (tn: We have SEVERAL posts on SIU's income, please use the search function, google it, etc.)

Well I hope you enjoyed this week's chapter, have a good week, stay healthy, and I hope to see you next week!