43F - Hell Train: The Floor of Death (15): This is the two hundred and forty-sixth chapter of Volume 2 of Tower of God.

Under a power limiter Urek Mazino confidently challenges Karaka. In De Jah's castle, Hockney is reminded of how he got his special eyes and Baam and Rachel get ready to head off to Hell Joe's fortress to rescue Grand De Sah. Meanwhile, Hell Joe looks on excitedly at Yuri playing around with Sanchez.

Urek approaching Karaka and the rest

<Service Operator> The second half of the script has been added. Thanks for your understanding.[2] 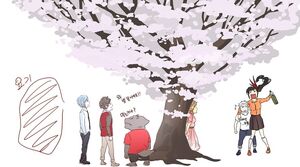 This is the afterwords to chapter 246.

This week's request is 솔이-nim's "Wasted Yuri and Evan pulling in the reigns", to the far right hehe.
If Yuri got wasted, she would uproot the cherry tree, so instead of completely wasted I got her just pleasantly buzzed up ^^;
Next week's request will go to the far left.
Tell me your scenario or characters!

Now that spring started and weather's gotten better, it's quite warm and relaxing.
I can't help but feel the urge to go out and take a trip around or something, buuuuut work.

This week... Urek has strong fingers. Since Urek is such a strong character I can't show everything off, but the Floor of Death Arc will feature a fight between High Rankers.
And after that will be peewee adventures after that for a bit hehe.
If High Rankers fight, it's a disaster-film level catastrophe, so it's a general rule not to fight each other if possible.
Karaka looks pretty pitiful here, but I just want to guys to know that Karaka's not that weak... yeah...

This arc is structured "Baam's Secret", "The Change in Baam and Rachel's Relationship", "Hell Joe Fight et al." and "Aftermatch".
So we're entering the third act of this arc.
Since the first parts were so long I had to stretch some parts and compress other parts...
It has pros and cons it seems ^^;
Well, now it's "Hell Joe Fight et al" act, so I hope you guys look forward to it.

Rachel and Baam holding hands to Hell Joe's castle... a bit extreme you could say ^^;;
But since there's a lot of variables like Hockney's eyes, so this arc should have a lot to see.

Recently, I've felt that for the amount of time I've posted Tower of God, I have done very little to expand to other media.
If I do that I can reach you guys more, and I'm not the only one managing all the content... I'm working hard but I'm keep facing hardships and difficulties it
It's been 7 years, but when I look around it feels a bit empty.

Well, when in doubt, time to reread, amirite? Haha

I'll try to bring good stories next week. Have a good week!